A Political Thumb On the Scales of Justice 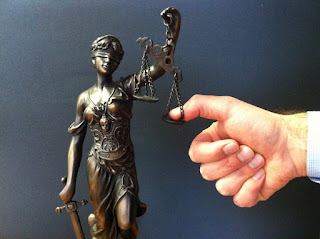 Trudeau slipped that authority into a 500-page omnibus bill trusting that no one would notice and no one did - until now. The resulting SNC-Lavalin dust-up has brought out the usual Trudeau apologists to defend the measure as a necessary reality in the modern economy. I disagree.

What we're seeing is not an accommodation of commercial reality but another ceding of power from the public to the corporate sector.

The absolutely ruinous (for most) era of globalization, ushered in by Reagan, Thatcher and Mulroney, weakened the relationship between the voting public and those they elect to high office. That was inevitable in the surrender of certain incidents of state sovereignty to the private sector through a litany of free trade agreements. With that some measure of governmental power was shared between the elected officials and the corporate sector. And, with that, these private interests were able to insinuate themselves between the public and their elected representatives.

America, with its now thoroughly "bought and paid for" Congress, is the poster boy for this sort of thing. A damning study out of Princeton in 2014 by two professors, Gilens (Princeton) and Page (Northwestern), documented how, when the public interest conflicted with private interests, the private interest routinely prevailed in America's Congress and state houses. It was of a scale that the authors concluded that the United States was no longer a democracy, having transitioned into a plutocracy.

Today, American corporations can do just about anything. Pay ten or twenty million and they get to walk. It's no surprise that the Brits followed suit. And it really should be no surprise that Justin did the same even if it was sneaky.

It's the commercially expedient thing to do. It appeases those in the boardrooms of our towering skyscrapers, a group this government is ever eager to please. Does that make it right? Of course not.

When you've already gifted so much sovereign power to the corporate sector, this is a humbling capitulation to the "too big to fail" enterprises. It is government, on behalf of the public, taking the knee. It is government putting its political thumb on the scales of justice if only for the well heeled - for the sake of the "national interest" of course.

We won't abuse the corporate "get out of jail almost free" card. Absolutely not. We're not the Americans or those scheming Brits. We do things the Canadian way in keeping with our much superior Canadian values, eh? Yeah, right.

What's that metaphor I'm looking for? Something to do with tents and some camel's nose. Don't worry, it'll come back to me.

While I'm waiting for that camel thing, I'll leave you with these words of warning from Theodore Roosevelt in 1910:

...now the great special business interests too often control and corrupt the men and methods of government for their own profit. We must drive the special interests out of politics. That is one of our tasks to-day. Every special interest is entitled to justice — full, fair, and complete — and, now, mind you, if there were any attempt by mob-violence to plunder and work harm to the special interest, whatever it may be, that I most dislike, and the wealthy man, whomsoever he may be, for whom I have the greatest contempt, I would fight for him, and you would if you were worth your salt. He should have justice. For every special interest is entitled to justice, but not one is entitled to a vote in Congress, to a voice on the bench, or to representation in any public office. The Constitution guarantees protection to property, and we must make that promise good. But it does not give the right of suffrage to any corporation.

...There can be no effective control of corporations while their political activity remains. To put an end to it will be neither a short nor an easy task, but it can be done.

Gotta love Canada. We have "soft corruption" baked into the constitution. It's called the Privy Council.

OF COURSE, politicians are supposed to do the dirty work of businessmen! It's called SOBER SECOND THOUGHT!

I think ALL politicians are empty husks. Just blind piglets sniffing their way to the teat, in one way or another. Great leaders of self-interest. Kinda like their masters!


I came into the world of politics at the tail end of an era marked by people such as Laurier, St. Laurent, Mike Pearson and Pierre Trudeau, dedicated visionaries who worked to build a better Canada. There's been no one of that stature since. "Empty husks" that's very apt.

Exactly. Well said, although the average citizen walking the street seems completely numb and uninterested in these details. Lambs to slaughter and all that.


Thanks, BM,you were right and I appreciate the catch.