How About Two Billion, Does That Cut Any Ice? 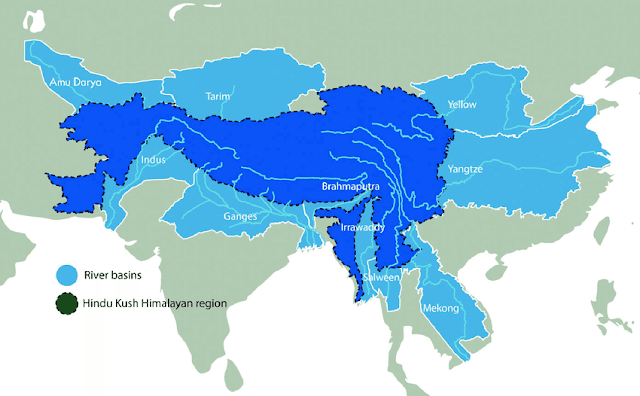 One aspect of climate change that is often missing from our conversation is how much of it is already locked in.

Until we find some mechanism to extract atmospheric greenhouse gases, not just a lot of CO2 but a big percentage of it, most of it, a massive amount of CO2, those persistent gases will continue to warm Earth's climate well into future centuries. At present we're still adding to it.

China, of course, occupies Tibet. That gives Beijing the whip hand over future access to a lot of that vital Himalayan water. That's more critical than ever now that climate change has made the annual Monsoon rains unreliable and unpredictable.


Even if carbon emissions are dramatically and rapidly cut and succeed in limiting global warming to 1.5C, 36% of the glaciers along in the Hindu Kush and Himalaya range will have gone by 2100. If emissions are not cut, the loss soars to two-thirds, the report found.

The glaciers are a critical water store for the 250 million people who live in the Hindu Kush-Himalaya (HKH) region, and 1.65 billion people rely on the great rivers that flow from the peaks into India, Pakistan, China and other nations.

The graphic at the top shows the great rivers of south and east Asia fed by the Himalayas - among them the Indus, the Ganges, the Brahmaputra and Irrawaddy, the Mekong, and the Yellow and Yangtze. What could possibly go wrong?
Posted by The Mound of Sound at 7:58 AM

Analogy.. try driving blindfolded
into Montreal during morning rush hour
in a small car with Ontario plates
and an open case of beer on the back seat

There you go.. Natural Consequences ..
some of it is predictable..
some of it may exceed expectations
or fantastical evengelical belief
Will it 'end well?'

No.. .. and that's the predictable part


Yes, I just found your email and I've replied with my other email address for backchannel messaging. Here you shall remain "Sal."

Thanks for responding. As for the Himalaya problem, I've been writing about that for years. Two billion people facing water insecurity. China in a position to divert some of the meltwater that flows to India. India in a position to see to its own needs at the expense of Pakistan. Little love lost among any of these three. A nuclear ticking time bomb.