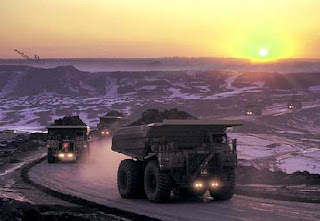 Has Big Fossil been fudging the environmental assessment studies it spoon feeds to Alberta's oh-so-accepting regulator?  Apparently so.

"It doesn't make any sense," says University of British Columbia biology professor Adam Ford, who published his findings in the journal Environmental Reviews.

"You would have to go out of your way to make it this bad. It's just a symptom of the state of the industry and it's definitely a signal that we can do better."

...Energy companies planning to build oilsands projects must file an environmental impact assessment. Such assessments generally take representative species and consider, based on expert opinion, how development would affect different aspects of their habitat.

Ford found 35 different species were studied. Only one — moose — appeared in all 30 assessments. Only 10 appeared in more than half of them.

... "What are the species we need to know about? We have experts in Canada who spend their entire lives thinking about these species. Let's get them involved so we can create robust habitat models, so that we don't have to revisit everybody's individual opinion."

"There's people who live on this land (whose) culture and way of life is tied to those animals. And we're telling them we're pretty much making this up."

They're pretty much making it all up. Sort of like how our prime minister is making up the fantasy that his government has "done the science" on the environmental safety of his (i.e. he bought it "his") pipeline and the risks bitumen poses to British Columbia's coastal waters, something refuted by Dave Shindler, the Royal Society of Canada and, oh yeah, Environment Canada.

Environmental assessments are contracted out by the applicant. Subsequent contracts go to firms that get results the applicant wants.

'Expert" opinion is bought and sold as a commodity.
Take care whilst listening to 'experts'