Breaking the Backs of America's Farmers, One Bankruptcy at a Time 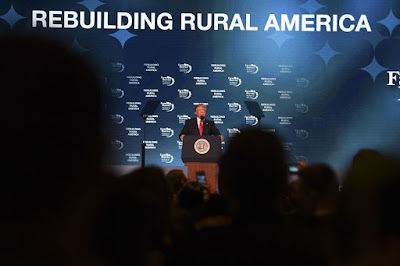 When Trump launched his trade wars he didn't pay much attention to those Americans likely to become his collateral damage. Among those were America's farmers.

According to the Wall Street Journal, Trump's trade antics were the straw that broke the farmers' back, triggering a wave of bankruptcies across America's farm belt.

States in those circuits accounted for nearly half of all sales of U.S. farm products in 2017, according to U.S. Department of Agriculture data.

The rise in farm bankruptcies represents a reckoning for rural America, which has suffered a multiyear slump in prices for corn, soybeans and other farm commodities touched off by a world-wide glut, made worse by growing competition from agriculture powerhouses such as Russia and Brazil.

Trade disputes under the Trump administration with major buyers of U.S. farm goods, such as China and Mexico, have further roiled agricultural markets and pressured farmers’ incomes. Prices for soybeans and hogs plummeted after those countries retaliated against U.S. steel and aluminum tariffs by imposing duties on U.S. products like oilseeds and pork, slashing shipments to big buyers.

Low milk prices are driving dairy farmers out of business in a market that’s also struggling with retaliatory tariffs on U.S. cheese from Mexico and China. Tariffs on U.S. pork have helped contribute to a record buildup in U.S. meat supplies, leading to lower prices for beef and chicken.

...Agricultural lenders, bankruptcy attorneys and farm advisers warn further bankruptcies are in the offing as more farmers shed assets and get deeper in debt, and banks deny the funds needed to plant a crop this spring.

...Conversations with distressed farmers have become more frequent for Frank Friar, a retired agricultural lender who mans phones at the Wisconsin Farm Center. The organization advises dairy farmers and crop producers on financing options, bankruptcy and when to leave the farm behind. Last year, it received more than 2,300 calls, the most since 2010, and the center has hired more staff in the past two years.

About a dozen times a year, Mr. Friar and his colleagues talk with a farmer who seems to be contemplating suicide, he said. The center’s staff often calls family members or neighbors who can check on the farmers, and sometimes Mr. Friar drives out to farms himself. “The uncertainty, will they survive on the home farm, is [causing] more people to think negatively,” Mr. Friar said.


Most of these farmers are from Heartland states that Trump took in a landslide in 2016. I'm pretty sure they weren't expecting this is how he would make America great again.

Photo: Trump speaks at American Farm Bureau convention in January, 2018
Posted by The Mound of Sound at 4:06 PM

Considering the threats from global warming and climate change Trump's agriculture policy (deliberate or not) is insane. There are going to be major disruptions in the corporate food chain; let's not make it worse.


This reminds me of an article in today's Guardian about the rightwing morons who pushed Brexit with promises that it would all be milk and honey for the UK.

There's an impulsiveness today whether it's Trumps trade war follies, the UK Tories' Brexit foul up or the Trudeau government's fleecing by Kinder Morgan on the sale of the Trans Mountain pipeline. There's a decided lack of "sober second thought" in today's politics. We will pay dearly for that.

It's amazing to read a blogger who argues so passionately against energy policies that increase global warming complaining about Trump's trade wars when the destruction of international trade for pure profit is a fantastic potential development for the environment. The closer agricultural products are consumed to where they are grown, the less fossil fuel will be burned getting them to market. There was a time not even a century ago when this was the NORM for 99% of humanity.

And this is why it's so important that Canada give up on those nasty anti-trade supply management policies. Why would anyone ever want to arrange to, like, produce as much food as they need and guarantee farmers a fair price for it?

I think the article is about small farmers and farms not the multinationals who will be salvinating at the opportunity to buy up farmland at basement prices.

This is a similar scenario to when we have real estate crashes.

Brexit has the potential to put Britains back back in the workhouses with similar bankruptcy scenarios,

.. we've been seeing tiny snippets about this in MainstreamMedia ever since Trump was elected. The conference or 'rally' banner is interesting - and charged with irony via the grifter Trump at a lectern underneath.. 'Rebuilding Rural America' .. overtones of 'Great Again' .. the great lie .. would love to see a transcript of what garbage crossed his lips.. I may actually do a little searching.. even a video will do. As an Ontario farm boy somewhat growed up, I can summon a pretty fair level of hate & anger for frauds who destroy the lives of farm families and their communities

Mound, I'm not sure the farmers are collateral damage so much as intended victims. Big Ag has always benefited from turning land-owning farmers into sharecroppers. With big business lobbyists and champions in charge of most of this regime's cabinet portfolios, allowing Big Ag to acquire acres of land through foreclosure sales seems more like a feature than a bug.


What amazes me, Karl, is how you distort what I posted. This isn't about US farmers and foreign markets. Those relationships weren't crafted by some farmer with 400 acres of land. That was the handiwork of their governments. It is about the precarious nature that American farmers (and others) are in due to trade policies engineered in Washington and New York and how neoliberals can ignore them when that suits their, not the farmers', purposes.

PLG, I agree. Supply management, like every other government policy, can be vulnerable to manipulation. Quotas, after all, are valuable. But, properly managed, they do suit the country.


Over the last few years there have been several articles focusing on how Big Agra with its industrial agriculture is accelerating the degradation of farmland. Monoculture and heavy reliance on agra-chems (fertilizers, pesticides and herbicides) is causing long-term damage. Agricultural run-off is devastating lakes and rivers with algae blooms and the waste ponds of pig farms is contaminating ground water. Oh well, that's the price of progress, eh?

IF anyone knows a thing or two about bankruptcy it's Donald Trump. The farmers have chosen good company when they cast their vote back in 2016.

It's perfect! The bank forecloses on the little guy, a section or two here and there. Corporate Agra moves in buying it up at a major discount. The bankers get their money back and Big Agra become Bigger Agra. The billionaires strike again. The same thing happened to my great grand parents in Alberta during the 30s. Some things never change.