Hmm, Five for Five. Is There a Message Here? 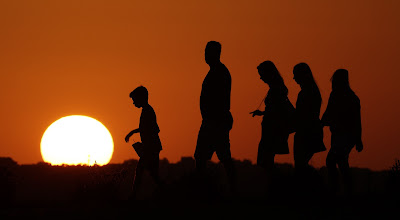 NASA scientists confirmed in a report Wednesday that 2018 was one of the hottest years on record, continuing what the New York Times called "an unmistakable warming trend."

Last year was the fourth-warmest on record since scientists began recording such data 140 years ago, according to NASA's Goddard Institute for Space Studies (GISS). This finding makes the last five years the five hottest years ever, scientists said, slapping down any question that the planet is growing warmer.

"2018 is yet again an extremely warm year on top of a long-term global warming trend," said GISS director Gavin Schmidt in a statement.

"The five warmest years have, in fact, been the last five years," he told the Times. "We're no longer talking about a situation where global warming is something in the future. It's here. It's now."

And what about the next five years, our next climate five-pack? Surely there's a cooling break here somewhere. No, sorry. The next five years are supposed to be hotter, record breaking hotter.


NASA and NOAA climate scientists said even though 2018 was a tad cooler than the three previous years that’s mostly due to random weather variations.

“Never mind the little wiggles from year to year. The trend is going relentlessly up, and it will continue to do so,” Potsdam Institute climate scientist Stefan Rahmstorf said in an email. “Those who live in denial of this fact are in denial of physics.”

Using computer simulations, the British weather office forecast s that the next five years will average somewhere between 58.51 and 59.49 degrees (14.73 to 15.27 Celsius). That would be warmer than the last four years.


But, but, but... we've got billions of barrels of bitumen in the ground and "no country would just leave them there." Five for five. You wanna go ten for ten?

He's done some good things but, when it comes to climate change and Canada's environment, the prime minister is an eco-poseur. Today's column from Michael Harris looks at Justin Trudeau's unconvincing treatment of our Atlantic and Pacific coasts.


Does the Prime Minister really care about the environment, as he always claims? Or is he just “genuinely insincere,” as Ottawa Life Magazine recently put it? Not an unimportant query, with this fall’s general election just eight months away.

Five for five.
Posted by The Mound of Sound at 8:26 AM

Unfortunately with all the lazy thinking about climate change going on in the higher order of leadership, all it will take is one cool year to be subjected to all the "told you so" blather. That'll probably be 2020 the year of Trump's likely 2nd term. Then by 2024 its off to the races to the point of no return.


Hi, BCW. I would be delighted with another "cool" year if only because I've read nothing to suggest there'll be one. There's too much greenhouse gas in the atmosphere, too much water vapour in the atmosphere and way too much heat in the ocean, especially the ocean depths, and no sign of any return of snow and sea ice to the Arctic to see where that cooling effect might come from. It's all physics at this point.

My Name is Bar Leo from usa, I wish to share my testimonies with the general public about what this same man i once saw on this forum called Dr.Agbazara of AGBAZARA TEMPLE has just done for me , this man has just brought back my lost Ex husband to me with his great spell within 72 hours. I was married to my husband Alana Evans, we were together for a long time and we loved our self's but when I was unable to give him a child for 4 years he left me and told me he can't continue anymore then I was now looking for ways to get him back until i saw Dr.Agbazara contact on this site about his powers. Please do also contact him in any problem you are passing and see for your self on: