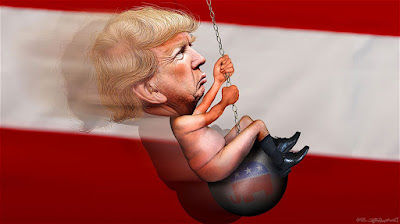 Is 2019 the year the Transatlantic Relationship irreparably fractured? Have Europe and the United States finally taken their leave of each other? Has the United States forfeited its right to proclaim itself leader of the free world? Have mutual rancour and distrust displaced what remained of the bonds between the EU and the US?

According to Brookings fellow, Thomas Wright, the "Transatlantic Charade" ended at the Munich Security Conference.


Europe and the Trump administration have stopped pretending to respect each other. For the past two years, we have been treated to a transatlantic charade. Everyone knows there’s a problem, but publicly the leaders proclaim that nothing has fundamentally changed. But at the 2019 Munich Security Conference, which took place over the weekend, the charade ended. The American position is collapsing under the weight of its own contradictions. The Europeans are defaulting to nostalgia for a multilateral order. Meanwhile, the true challenge of a rising authoritarian bloc goes largely ignored.

The mood of defiance was summed up by Wolfgang Ischinger, the chairman of the Munich Security Conference, in his opening and closing remarks. Ischinger, who is 72, opened the forum’s proceedings sporting a hoodie emblazoned with the EU flag—a gift from his grandson, and a not-too-subtle rebuke to an American administration that has reversed a 70-year policy of support for Europe. Three days later, in a suit and tie, he offered his closing observation: “As this conference concludes, critics might argue that some speakers were less interested in putting the pieces back together than in creating more disarray in our international system.”

The "some speakers" Ischinger referenced were Trump Veep, Mike Pence, and secretary of state Pompeo.


In 2017, Pence spoke at length about the importance of the NATO alliance and its historic accomplishments. In 2019, there was none of that. The only praise of NATO was for its response to Trump’s leadership on defense spending. Otherwise, Pence offered a litany of criticism leveled against NATO and the EU—for not doing enough on Iran, Nord Stream 2, or Venezuela. (Ironically, the EU would have had a common position on this last item were it not for the effective veto of the pro-Trump Italian government.)

Pence could have come and spoken about the common challenge facing the alliance from China—which is what many Europeans and Americans expected him to do.  ...He did not choose that path, possibly fearing that it would be shot down by a president who has repeatedly rejected the idea of working with the EU on China.

The administration’s America First approach to Europe is now riven with contradictions. Take Iran as an example. Senior administration officials have repeatedly said over the past year that while the United States was pulling out of the JCPOA, the Iran nuclear deal, they were not calling on the EU to do the same. That, they said, was a matter for Europeans, as sovereign nations, to decide. Apparently sovereignty is not what it used to be. With no explanation for the U-turn, Pence demanded that the EU now withdraw from the JCPOA. His message was clear: Under Trump, the alliance means getting behind whatever Washington decides, even if that changes weekly.

...The European position is understandable, but fraught with risk. Help, if it comes, will not arrive until 2021. Rumors are rife in Washington of a new Trump move against the NATO alliance, which is preparing for a major meeting in Washington in April.

...But despite all the problems of policy and personnel, the alliance cannot afford to wait two years. The Trump administration may believe that it does not need Europe, and the Europeans may believe that America is temporarily lost, but meanwhile, China and Russia gain ground. In Munich, Yang Jiechi, a senior Chinese official, gave a long and meandering speech about win-win solutions and the benefits of multilateralism, which was completely at odds with China’s increasingly assertive and disruptive behavior. Russian Foreign Minister Sergey Lavrov and Iranian Foreign Minister Mohammad Javad Zarif reveled in the disarray between the allies and sought to drive a wedge between them, weaponizing the Trump administration’s rhetoric about sovereignty.

Wolfgang Ischinger was right. There is a big problem. Western leaders are retreating into their foxholes, taking potshots at one another, rather than figuring out how to deal with new challenges. We’ve been lucky so far that there has not been a major crisis on Trump’s watch, but the luck is unlikely to hold forever.

Then there's the formerly United Kingdom where both the Conservative and Labour parties are adrift, in disarray and chaos ensues with a hard Brexit now less than forty days off. Guardian diplomatic editor, Patrick Wintour, writes that, even at the United Nations, British influence is in palpable decline.


Brexit is already leading to a “palpable decline” in British influence at the UN, and that influence would be in freefall but for the UK’s commitment to spend 0.7 % of gross national income on overseas aid, a study has found.

The report by the UK branch of the United Nations Association suggests Britain will lose political capital on the 15-member UN security council and the larger general assembly in New York because its campaigns will no longer be automatically aligned with those of the EU.

One by one, the grand old stalwarts are descending into chaos, the United States, the European Union and the no-longer-Great Britain. No one, it seems, has any remedy for this affliction. In most cases the decline in governance is mirrored by an equally worrisome fracturing of social cohesion.

It is not unfair to say that Donald Trump has played an outsized role in this disunity. Much of it emanates from his damaged psyche and his malignant narcissism. That is the most likely outcome when the most powerful man on the planet is mentally unwell.  Then again, destabilizing the West is exactly what Trump's Kremlin idol, Vlad Putin, craves most.