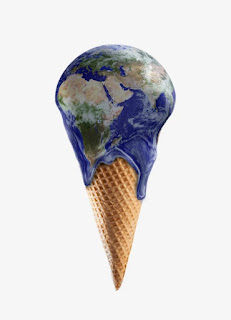 Who can forget those halcyon days in late 2015 when Justin Trudeau and Cathy McKenna swept into the Paris climate summit, helping to set the goal of holding global warming to 1.5 degrees Celsius? If the nations could just cut emissions enough we might be able to hold warming to a somewhat livable 1.5 C.

Then they packed their bags, flew back home and decided, "screw that." Talk is cheap but pipelines aren't and, besides, who could say no to all that revenue from flooding world markets with high-carbon bitumen.  Not Team Justin, that's for sure.

So, instead of cutting emissions they grew. They grew in 2018 and they'll grow even faster this year. And lordy, lordy, lordy, guess what? The British Met Office  says we'll blow through that 1.5 C "do not exceed" target by 2023.

It's not Armageddon. It should be a temporary thing, an event. But still.


Since 2014, the world has experienced the four hottest years since records began in 1850, but these highs are likely to be exceeded soon. From now until 2023, the Met has 90% confidence that mean annual temperatures will range between 1.03C and 1.57C above pre-industrial levels.

The recent United Nations Intergovernmental Panel on Climate Change report on warming of 1.5C, highlighted the calamitous difference even a fraction of a degree above could make to coral reefs, Arctic ecosystems and hundreds of millions of lives. Starting now, the report said emissions would have to be cut by 45% by 2030 to have any chance of holding to that level.

“Breaching 1.5C of global warming does indeed mean that we failed to limit warming to that ‘safe’ level, but not that our understanding of a safe level of climate change has suddenly changed and climate change should go unchecked,” said Rogelj, who was was a coordinating lead author on the UN report. “Every tenth of a degree matters. So if 1.5C of global warming would be exceeded for whatever reason, this would be a call for steeper emissions reductions.”

2023 is the year by which Camilo Mora's climate science team from the University of Hawaii predicts will mark the beginning of "climate departure."


“The coldest year in the future will be warmer than the hottest year in the past,” said Camilo Mora, the lead scientist on a paper published in the journal Nature.

Unprecedented climates will arrive even sooner in the tropics, Dr. Mora’s group predicts, putting increasing stress on human societies there, on the coral reefs that supply millions of people with fish, and on the world’s greatest forests.

“Go back in your life to think about the hottest, most traumatic event you have experienced,” Dr. Mora said in an interview. “What we’re saying is that very soon, that event is going to become the norm.”