Breaking Faith with Democracy in Canada 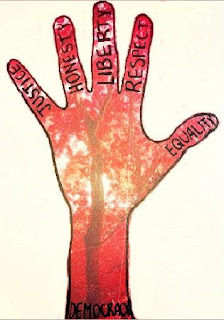 I knew, almost from the outset, that there was something deeply wrong with the government of Justin Trudeau.

The freshly-minted prime minister, perhaps in a moment of hubris, chose to publish online the mandate letters issued to all of his cabinet appointments. What came through from those letters was that ministers were given two co-mandates: one was the bailiwick of that particular ministry (i.e. transportation, defence, etc.) while the other was the Canadian economy. I can vividly remember Trudeau's enviro-min, Dame Cathy McKenna, proclaiming the duality of her role as both environment minister and economic minister.  We must not do anything on the environmental front that might impinge on economic growth in the petro-state. Take a minute to get your head around that.

Those mandate letters were a powerful expression of the hold the neoliberal order would have on the Trudeau administration. And so we had a prime minister who had promised to fight the good fight against climate change doing relatively little while continuing to subsidize fossil fuel production and, ultimately, pouring billions of dollars into an expanded bitumen pipeline. That's the economy utterly crushing the environment. Canada would remain, first and foremost, a petro-state.

What we're now witnessing is what happens when the economy butts heads with the rule of law, the administration of justice. With the SNC-L corruption the PMO had to choose - would it be the economy and the party's electoral fortunes in Quebec this October or would it uphold the rule of law and the administration of justice. True to form, the economy and partisan political advantage prevailed again. There were higher interests to be served than upholding the rule of law. Of course, like all skulduggery, that had to be done in private meetings, behind closed doors.

For years, critics of neoliberalism have warned that it's a degenerative disorder that, as it progresses into its final stages, undermines democracy and paves the way for authoritarian, anti-democratic takeover. That's a recurrent theme in Thomas Piketty's celebrated book, "Capital in the Twenty-First Century." (If you don't want to buy his nearly 500 page tome, follow that link to get it free in pdf.) More recently, Chris Hedges wrote of "Neoliberalism's Dark Path to Fascism." If you want something a bit more vintage, check out public intellectual Henry Giroux's prescient 2004 book, "The Terror of Neoliberalism: Authoritarianism and the Eclipse of Democracy."

There is no shortage of brilliant, powerful literature warning us of the ultimate price to be paid for sitting on our hands and doing nothing as the neoliberals corrode our democracy. Just because they're from your party and have a pretty face changes nothing. Even Justin Trudeau is a handmaiden of the neoliberal order. The proof is in the irreconcilable contradictions in his policies, the recurrent cognitive dissonance in his actions and his words. He's not Erdogan or Orban or Trump. We haven't reached that stage yet but do tell me that rightwing populism hasn't already achieved a firm toehold in Canada. There are plenty among us today who have developed a taste for authoritarianism and intolerance. The government of the day has done literally nothing to push back.

The era of Laurier, St. Laurent, Pearson and Pierre Trudeau is no longer with us. Progressive democracy in Canada has been usurped. Unless we reverse that, reconnect to the values of the past, we may have to kiss our own democracy goodbye. This is a perfect moment for Liberals to do a bit of soul-searching.

Brookings just released a paper on "The Anatomy of Illiberal States" - in Europe. The link takes you to the pdf. of the 55-page report. Amusingly it focuses on Europe and seems to have nothing to say about the Illiberal States of America.
Posted by The Mound of Sound at 12:01 PM

I remember thinking back when they first hunted up Trudeau for the leadership that the Liberal party had in a sense screwed up. It was already clear that electorally it was about the best thing they could have done. But at that point, the Liberal party had faced strong pressures, many calls including from within the party, to do some serious soul searching and really come up with and articulate some ideas and principles about just what the centre should stand for in the 21st century. To create a Liberal party that was about some actual thing or things rather than just what remains after you subtract all strong partisan beliefs.

Instead, they brought in a pretty face with a big name, shiny coat of lipstick for the same old pig, and this is the result.

Mind you, I'm not convinced that at this stage of history it is possible to come up with ideas which are both positive, credible, and centrist. First because on most of what politics is about the dominant ideas are so radical that anything genuinely centrist would seem radical. Second because with climate change and various other problems, the times are extreme and centrist solutions will by definition not be credible for dealing with them. So maybe they had no option. But they didn't even really try.

PLG, I recall during the Liberal leadership contest wondering if I wasn't looking at candidates for the head of the Chamber of Commerce.

There's not much liberalism to be had from the Liberal Party of Canada. That said, what do you imagine Lincoln might say if he could get a good look at today's Republican Party?

.. The problem (which must be better stated)

How to gain or regain - control - accountability - transparency
back from the Government of Canada and Big Business
ideally doing so as well, at provincial & civic levels as well
and fully understanding the stages & duration of the process

I don't pretend to have the answer (am thinking laterally though)
but I do know who else does not have the answer..
and that is our Political Parties, Mainstream Media
Big Business, especially foreign owned,
our miliitary or any particular Religion
Talk radio or national tv panels in particular
are almost all simply hysterical sellout no nothings
out there slugging for their pimp owners

On Lincoln, Republican party--he'd think it had been taken over by a weird cabal representing the worst impulses of the British East India Company and the gangs of New York.

Sal, I have no confidence that we can muster the political will to rid ourselves of neoliberalism. It has burrowed deeply into our politic and it won't go without a fight even as the plebs have come to accept it as a sometimes mildly annoying reality.


I can't argue with any of that, PLG.

Ultmately, we are the source of the malady. And we refuse to recognize that fact.


What force would be needed, Owen, to recalibrate our collective thinking?

What percentage of the public has a working understanding of neoliberalism and how it operates in Canada and across the West? It never announces its presence and buries itself behind a mask of democracy. If we don't understand it and can't detect it working behind the scenes, we're captured.

So far, there are few Canadians who know what the word "neoliberalism" nor what it encompasses. When ever I have used the word, I get a look of utter confusion. And, for the love of humanity don't use the word "precariat". This word is not even found in spell check. Anyong


And that's why neoliberalism is so insidious, Anyong. We don't understand it. We don't see it. We don't perceive how it is transforming what remains of our democracy. It is, in many ways, a stealth ideology, the operating system of our political reality.