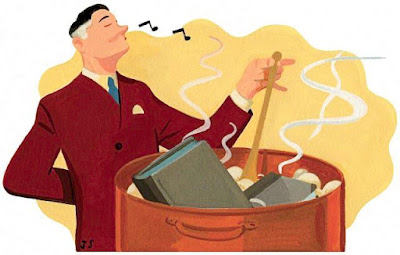 It's a classic con - two sets of books. There's one set "cooked" for public consumption to mislead investors, creditors and regulators and another set of books that reveals the skulduggery no one else must ever see.  Swindlers use it all the time. So too do politicians, especially those with a petro-economy.  Eventually the truth emerges and the scam falls apart. Think EnRon. Think the government of Alberta.

Alberta isn't alone. Canada has plenty of energy miscreants scattered throughout its political ranks but Alberta is the poster boy of the big con.  Alberta's native son, energy scribe Andrew Nikiforuk, gets into this disaster in waiting in today's Tyee.  It's a tale of greed and cowardice in equal measure.

Nikiforuk writes that last week's decision of the Supreme Court of Canada requiring environmental liabilities to be met before even secured creditors can get at the assets of energy companies comes too late to correct the mess that has already beset the Wild Rose province.

Technically the 5-2 court decision will make it easier for provinces to prevent insolvent companies from selling assets to pay creditors while dumping the cleanup bill onto taxpayers.

That’s been a big problem in Western Canada, where lower provincial court decisions have allowed bankrupt firms to pay off banks first and ignore their cleanup obligations under provincial laws.

As a result, a number of firms in Alberta walked away from more than 1,800 inactive wells and dumped more than $110 million worth of liabilities onto the lap of the provincial regulator over the last three years.

The province’s Orphan Well Association, a non-profit supported by annual $30-million industry levies to prevent taxpayers from footing the cleanup bill, is now so overwhelmed that it was rescued with a $300-million loan from the province and federal government.

The Orphan Well Association handled 74 orphan wells (properties with no legal or financial owner) in 2012. Now it has a backlog of 3,000 wells, with each well averaging $300,000 for plugging and reclamation.

“The industry is not making enough money to pay for these liabilities. Outside of the oilsands sector, companies aren’t making much profit and are losing money.”

Edmonton lawyer, Keith Wilson, says provincial governments were complicit in allowing the energy giants to grab the money and run.


“It is a known fact that the oil and gas industry has made some of the biggest profits in commerce in history. The money was there, but the companies never put some aside to deal with their liabilities and governments allowed them to do that with their eyes wide open,” said Wilson.

Governments simply avoid the problem, for now, by looking the other way.


Alberta’s Liability Management Rating program, for example, has kept track of growing liabilities compared to assets for about 800 companies in the oil patch for nearly two decades, but it doesn’t collect money for cleaning up liabilities until the companies are “already showing declining financial capacity,” said Wadsworth.

In 2005, for example, it calculated that more than 33,000 inactive wells and 9,322 unreclaimed facilities created a liability of $9.4 billion, with a $20-million security deposit. The same program has watched as liabilities have grown exponentially. There are now more than 80,000 inactive wells and related liabilities worth $31 billion, with a security deposit of $226 million.

“With no timelines for cleaning up inactive wells, the government has incentivized companies to do nothing,” said Wilson.

British Columbia and Saskatchewan are in the same boat although to a much lower extent.

“The NDP and the United Conservative Party are now in competition for being the biggest cheerleaders for industry. The NDP won’t do anything because they are afraid that the UCP will use it as an example that they are against the oil and gas industry,” he said.

As a result, neither party is serving the best interests of the environment or taxpayers, said Wilson.

Meanwhile Rachel Notley has mastered the petro-state shuck and jive:

Wilson said the problem is “not only monumental but complicated.”

“If the government implemented a five-year timeline for cleaning up nearly 200,000 inactive wells, a large part of the industry would go bankrupt.”

Which raises the question of why Trudeau is aiding and abetting this racket by using billions of dollars from the already depleted federal treasury to buy and develop the Trans Mountain pipeline? I'm sure you'll never get a straight answer out of him.

“In 2016, high-ranking Chinese officials told Trudeau they might be interested in such a deal, but only if Canada removed investment restrictions on energy projects and built an energy pipeline to the coast”


I'm still astonished by the contortions that our federal and provincial parties go through to maintain the illusion that these fossil resources are a source of endless wealth. Bargain basement royalties, grants, deferrals and subsidies in the many billions of dollars and still Alberta winds up broke with every boom and bust cycle. Meanwhile this ecological time bomb beyond the government's financial ability to make good is allowed to grow even as the foreign energy giants scoop up revenue and get it out of the country.

Norway has a trillion $ in their sovereign wealth fund. How do they handle these inactive & orphaned wells?


Norway's oil comes from the North Sea. There may be an issue with dormant rigs but I've not seen anything on that.

Pretty sure it was a dig at The Alberta Prayer.

“ Please God,
give us another oil boom,
We promise to not piss it away,
Like last time.”

Norway had some fish, timber and minerals. They took their North Sea windfall, and to avoid Dutch Disease, stuck 60% in the Bank, 20% in Education and 20% in diversifying their economy.