The Age of Chaos 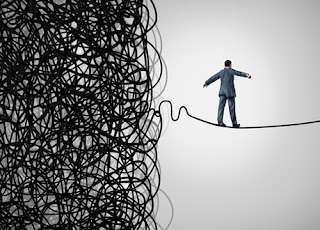 In the opening years of this century, our new millennia, some historians predicted that the 21st century would be a "century of revolution."  Almost 20 years in, it's looking as though they were right.

We've already had our share of game changers. Among them were the terror attacks of September 11, 2001 that launched America and her allies into futile wars in Afghanistan, Iraq and Syria with a war against Iran now a real possibility.

As this century opened we were talking about climate change in the context of horrible things that might happen, perhaps as soon as the end of the century, if we didn't mend our ways. Little did we know those end of the century estimates were out by 70 to 80 years.  We were caught unaware to the point where, in 2018, we were told that mankind had just 12 years in which to slash greenhouse gas emissions by fully half if we were to avert runaway global warming. We are not heeding that warning, just the opposite. Carbon emissions continue to grow and now the thawing permafrost is adding an as yet unknown volume of methane and CO2 to the mix. The fingerprints marking the arrival of climate change are everywhere now - severe weather events of increasing frequency, duration and intensity, droughts, floods, pest and species migration, on and on and on.

Social upheaval is spreading. There was the ill-fated Occupy movement in the US, the failure of which we may one day come to rue. We're witnessing the rise of authoritarianism from the Philippines to Hungary, Poland, Italy, Brazil and, of course, the United States and it is poised to spread even further. This flows out of the rise of right wing or negative populism driven by insecurity, paranoia, xenophobia and often outright racism. Left wing or progressive populism, positive populism (think Theodore and Franklin Roosevelt), fueled not by fear but by hope, confidence and aspiration has failed to respond and cannot capture the popular imagination. Democracy pays the price for that failure.

We do seem to be in the grip of an age of chaos.  The history of revolution and upheaval shows it's rarely a linear process and it won't be this time either. There are too many seismic forces at play - climate change, overpopulation, resource depletion and, in some cases, exhaustion.  There are no quick fixes for any of these things, no great plans in the works. We're going to have to ride this out as best we can.

What Canadians can do is finally realize the advantages that we have compared to the vast majority of countries.  We have land, resources, and a well-educated populace. The gaping wound, however, is our lack of social cohesion, this rift that has been cultivated in us, dividing us into hostile camps. Surely we have seen how that plays out in so many countries over the past decade. Why would we invite that contagion into our own nation?

If you want to make someone your enemy, you had better have a plan for defeating them and not just at the ballot box. There are hot heads on both sides of this horrible divide who don't see the self-defeating futility of their rancour. We will have differences. We will have lasting differences. Some differences are bigger than others. Some spring more from tribalism than anything else. Some squabbles can be settled and put behind us. When we do that we bring both sides closer together and bolster social cohesion.

In the 12,000 year history of human civilization, mankind has never been in the vexing situation that we face today.   Some of these threats may abate. Many, we're told, will worsen. If we're so distracted by frivolous squabbling, we're screwed.

We live in an age when trivialities, aided and abetted by the most powerful tools of communication the world has ever known, take precedence over the crucial issues that will define our fate, Mound. People seem more interested in the tattoo Ariana Grande got than the horrible impacts we have on the environment that nurtures us.


We have to move past that, Lorne. We all lose if we cannot. This stridency that has become so ordinary today will cause us nothing but problems.

.. I need a reread or two.. excellent essay ! Merci Beaucoup !

Mor and more I am shocked at the sloppy efforts of our hired 'public servants' .. and I struggle to refine a strategy to begin to affect this. For now I am gokng to single out Andrew Scheer as a flailing example. So i begin. What actual 'policy' or situation.. what huge mistake or error does he propose effectively.. to resolve ? Here are but a few examples where somehow, he and his brain trust, war room, back room womks, wanks and cranks.. indeed his entire caucus.. ie the elected MP's purportadly reflecting their respective ridings.. seem to never mention. I will try to list but 10 off the top of my head

Oh Deary Me.. I hope that's not a burden for our always cheerful & dimply Mr Scheer. (who wouldn't be cheerful when Canadian taxpayers have fed, housed, transported, salaried, pensioned & provided nannies & resisence coordinator for approx 10 years.. and one is now net worth approx 9 Million $ .. ? Eh ?)