Even NatPo Figured It Out, Finally. 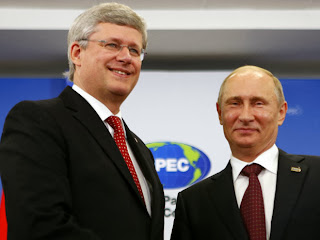 Five days after the Wright-Duffy-Harper offshoot of the earlier Senate expenses scandal became public, your humble scribe predicted that Harper's Achilles' Heel in the PMO scandal was the fact that two of the parties directly implicated, Nigel Wright and Benjamin Perrin, were lawyers.

That was May 20th.  Now, slightly more than six months later, the National Post has figured out the same thing.   There are rather dire consequences when lawyers participate in a fraud.   The payment of money to Duffy without Harper's consent is quite likely a criminal act.   That's why it's all but inconceivable that lawyer, indeed law professor, Benjamin Perrin, personal legal advisor to the prime minister, would have negotiated the deal with Duffy's solicitor unless he knew that he was acting with his client, Stephen Harper's consent and authorization.

Perrin abruptly left the PMO and hightailed it back to Vancouver only about a month after the under-the-table cash deal was transacted.  He more than curiously popped up only once and then only to deny having had anything to do with the deal, something the documents flatly disprove.  My guess is that Perrin split for his own sake and for the prime minister's.

Wright may face prison, and two lawyers who had knowledge of the deal may face sanction from their law societies, unless Harper says that he knew about the deal.

“He can’t say that,” said Walsh. “He would then be publicly responsible for the shenanigans that were going on. That’s a political problem for him. Now, legally if he were to say that, these guys get off. If Harper knew what was going on, that removes the criminality.”

Walsh says this situation may explain why Harper has been reluctant to discuss in detail what he did know about the deal.

Throwing somebody under the Conservative Party bus is old hat to Stephen Harper.   Sending them to the Greybar Hotel to cover his ass is something else entirely.

It would have all been so much simpler if Nigel Wright had simply followed the Mulroney protocol and met Duffy at a coffee shop to slide an envelope full of cash across the table.

Afterthought - I have long thought that Stephen Harper had many of the instincts of Joseph Stalin.  Maybe I underestimated him.  Lately he's looking a lot more like Ivan the Terrible.
Posted by The Mound of Sound at 12:58 PM

.. somebody must answer re the 'disapeared' emails of Benjamin Perrin. And truly, the question should be asked re status of Arthur Hamilton's emails and comms

So.. when will the truly loaded questions be asked.. and who will claim Solicitor/Client priviledge on behalf of Benjamin Perriin, no doubt also re Arthur Hamilton, certainly re Stephen Harper .. possibly Nigel Wright?

Who has or had such access, authority, permissions or directives fo do this?

Who has the knowhow, the time, the access for such extensive and technical operations either within Parliament or within the Conservative Party mail servers, drives, backup drives, binders, hard copy etc?

Who got permission from on high to undertake such deletions, removals, copying, moving of data?

We both know any cop or RCMP worth their salt would roll back from there.. the plumber or geek who actually went into the computer systems, drives, clouds etc..

Perrin, Hamilton, Novak, Byrne, Lecce, Wright
and all the 2nd tier stooges ..
and on down the ranks..
Who is coming clean first ?

".. somebody must answer re the 'disapeared' emails of Benjamin Perrin. And truly, the question should be asked re status of Arthur Hamilton's emails and comms"

I wouldn't worry too much about this yet,salamander. It appears that the RCMP have some top notch investigators on the case. For now, anyway.

Destroying e-mails pertaining to Perrin's activities in the PMO scandal could certainly leave him exposed to obstruction charges, destruction of evidence, etc. It also is strongly suggesting of awareness of wrongdoing and intent. After all, Perrin teaches criminal law. A guy like that doesn't readily get the benefit of the doubt.

The signs taken together. The abruptness of Perrin's departure from the PMO. The timing of his departure. The missing e-mails. His foolish denial of having anything to do with the $90k under-the-table deal, everything points to culpability and a guy fleeing the scene of the crime in a panic.

You appear to be missing the truly delicious fact that Perrin is screwed either way. If he acted on his clients (Harpers) instructions, then he is clear of misconduct vis-a-vis his client, however he probably becomes a party to an attempt to bribe a Senator. If he acted without Harpers knowledge he is in hot water both with Law Society, and the law. The saving grace for him is that with respect to the law, he cannot be compelled to reveal any of his discussions with his client. He is actually prohibited from discussing it, unless his client gves consent of course. This is the reason why every election table of organisation I have ever seen from either Liberal or CPC sources has the Candidate formally seperated from the campaign team by using a lawyer as the interlocutor between campaign and candidate. Then absolutely nothing can be pinned on the candidate unless someone squeals.

Despite my best wishes I'll be shiocked if any of this gets referred to a law society, and even if it does, it will be buried for years.

I don't think it's quite that simple, Matt. The Criminal Code provisions appear to apply to this sort of deal if it's done without Harper's consent. It's that blurry line between crime and politics. In the context of criminal charges it seems that Harper can take just about everyone off the hook if he confesses that he knew and approved of everything done.

As for solicitor-client privilege, it's not nearly as absolute as you seem to think. For example, the privilege (which belongs to the client, not the lawyer) cannot be asserted in the case of criminal conduct. Lawyers cannot facilitate crimes and then stand mute. Just imagine what must follow if they could.

@ Double Nickel - the Law Society of B.C. has already opened an investigation into Perrin. They're a lot more diligent about these things than the lay public imagines. I know from having done a lot of work for them in years past that they're pretty straight up.

I cannot speak for the Law Society of Upper Canada and how they might deal with Arthur Hamilton and, potentially, Nigel Wright if he's a member.

The sort of proceedings a law society might bring could be career-ending and would be professionally destructive even if they didn't lead to outright disbarment. Would Perrin throw away the rest of his professional life to cover for a prime minister who might be already fatally gored? It doesn't seem likely, especially if Wright defends himself.

According to Steve's dcomm Jason MacDonald, Treasury guidelines state the onus was on Perrin to determine which emails should be deleted upon his departure from the PMO.
So - all of them then? Really?

Given the other end of the Perrin emails negotiating the Duffy deal was Duffy's lawyer, it could be difficult to get copies of them.

I don't know quite what to make of Walsh, Allison. The guidelines may have made it Perrin's right/obligation to determine what e-mails were to be excised but that's not an absolute discretion. No one is allowed to destroy evidence and, given Perrin's hurried departure and his laughable claim to have had nothing at all to do with the Duffy deal it's going to be more than tough for him to claim he was just doing normal housekeeping - no matter what Walsh says.

Sure you do ordinary housekeeping. You clean out e-mails inviting somebody to lunch or making a squash date. That,however, is not what this is about.

Walsh certainly didn't give me the impression he thought it was on the up and up either, insofar as Perrin was not the actual owner of emails concerning government business.

Amir Attaran, who has launched a complaint of professional misconduct about it with the BC and Ont Law Societies, brought up an interesting point :

That may be relevant, he said, because Perrin may have had a “joint retainer,” meaning that he may have had both the office and the prime minister as his clients."

Fascinating issues, Alison. Does the PMO have separate legal existence from the prime minister? Is there a shared privilege over the documents. Can it be waived by one yet not the other? Who, other than Harper, waived privilege on behalf of the PMO? If, as I suspect, only Harper had the authority to waive privilege on behalf of the PMO, would that constitute a constructive waiver of privilege over those same documents and in respect of those same matters on his own behalf?

Of course these are technical, legal questions that may or may not need to be sorted out in a court.

Harper's problem is the greater political dimension of playing the privilege card. With a solid majority of the public already believing Harper is lying, how would they perceive the assertion of privilege other than as obstruction and abuse of power by a likely culprit?

I don't think Harper can harm himself as much any more as he can harm the Conservative brand. Those in the upper ranks of the party and those in the caucus eyeing a run for re-election in 2015 won't be pleased if Harper next throws the whole operation under the bus in a blatant effort to save his own skin from disgrace.

This might be a very great strain on the ties that bind hardcore reformers (Harper loyalists) to moderate reformers and the Progressive Conservative faction.

Here's the latest rumour I'm hearing from my old school Tory friends in Ottawa - Jean Charest. I was kind of floored when I first heard that but I'm told they're not pulling my leg.

I've always said that the real threat to Stephen Harper isn't the cops nor is it the opposition. It's the insurgency that has always simmered along within the Conservative ranks and struck its first blow when it leaked the initial Duffy e-mail to CTV's Bob Fife. I wasn't sure it would survive the summer but it was behind that document dump in August that refreshed the scandal and was at least partly behind Harper's decision to prorogue Parliament's return.

.. where is Hunter S. Thompson ? When you need him?

Sal, you bring to mind a bumper sticker I saw on a New Hampshire car on Parliament Hill back in the days when it was legal for tourists to drive up there. I was first struck by the licence plate. The state motto is "Live Free or Die" which, to me, didn't seem to be much of a choice. The bumper sticker, obviously reflecting the Nixon impeachment effort underway, read "Where Is Lee Harvey Oswald, Now That We Need Him?"