Rob Ford as Harper's Next Chief of Staff? 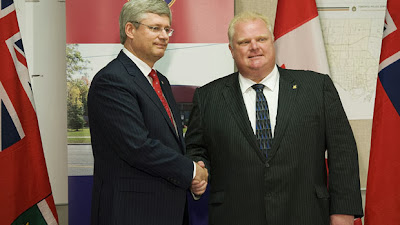 Relax, it's only an idea - one that originated from a reader, Gingersnap.

After all, Rob Ford is a staunch Conservative.  Even Sideshow Steve Harper put in an appearance at Ford's summer barbeque to sing praises of the bloated buffoon.

Steve likes to rescue people down on their luck.  Harper likes to use the PMO for their rehabilitation.   That, after all, was the narrative Steve had to fall back on during the Bruce Carson scandal once all of Steve's previous lies had been debunked.   Carson is long gone and, then again, so is Nigel Wright.  Harper is currently using some kid he found camped out above the garage at 24 Sussex Drive - the "kid in short pants" - and he could certainly use an experienced hand like the mayor of the largest city in Canada.

Besides, with RCMP security at the prime minister's beck and call, there'd be no more room for "hookers and blow" scandals of the sort that plague Ford at the moment.  Think of how grateful Torontonians would be to be relieved of their Chief Humiliator.   Harper's PMO is already so corrupt that it's hard to imagine that Ford could make it any worse.
Posted by The Mound of Sound at 11:16 AM

I think you mean Chief of Sleaze, not Staff, eh? Lol

The residents of Ottawa will not like it though. The stench coming from the Senators and their Dear Leader is already overpowering, so I understand.

The Ford brothers should move to Alberta. Now that is a place where they would really appreciate Robbie. Look at how they keep voting for Ralphie who apparently had trouble standing straight some days.

And Robbie's language would remind them of good ole Ralphie's. Add to this, Robbie gets to be closer to his fishing buddy, Steve.

Real win-win situation for all, yes?

The Ford's know they have no political future, they are focused on being the next Caribou Barbie of the Right. There's money in that you know, big money

This blog has really gone down the crapper.This is moron stuff.