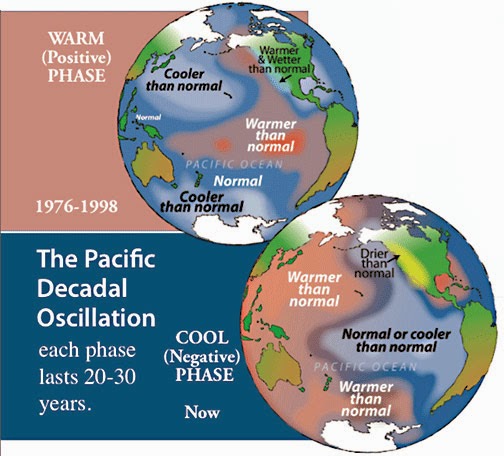 You may have never heard of the Pacific Decadal Oscillation (PDO) or, as its sometimes called, the Pacific multi-decadal oscillation.  Before long that will change.

There have been references to it here and there but it wasn't until this article was posted at Climate Central on the 27th of last month that I finally spent a bit of time exploring it.

You've probably heard of ENSO, the El Nino Southern Oscillation that brings us El Nino or La Nina conditions every seven years or so.  PDO is something like ENSO on steroids and for the past 15-years it's been sucking heat out of the atmosphere and burying it in the waters of the Pacific Ocean.  That, apparently, is soon to change.

Humanity is about to experience a historically unprecedented spike in temperatures.

That’s the ominous conclusion of a vast and growing body of research that links sweeping Pacific Ocean cycles with rates of warming at the planet’s surface — warming rates that could affect how communities and nations respond to threats posed by climate change.

Papers in two leading journals this week reaffirmed that the warming effects of a substantial chunk of our greenhouse gas pollution have been avoided on land for the last 15 to 20 years because of a phase in a decades-long cycle of ocean winds and currents. With Pacific trade winds expected to slacken in the years ahead, the studies warn that seas will begin absorbing less of global warming’s energy, and that some of the heat they’ve been holding onto will rise to the surface.

You see, for the past two decades we've sort of been running a tab on the extra heat generated by our growing greenhouse gas emissions.  That heat didn't go away, PDO merely stored it in the ocean.  Because that heat got sucked underwater we didn't notice how much we were actually warming the planet. But just as an ocean can absorb heat from the atmosphere so too can a warmed ocean release heat back into the atmosphere.

Amid the questions left unanswered by the research, however, are whether communities are prepared for looming assaults of increasingly intense heat waves after the warming slowdown reverses, and how the expected spikes in surface temperatures could affect policy debates dealing with climate action and clean energy.

"A future speedup in warming is likely to affect public opinion about climate change if it results in changes at the local level that people recognize," Utah State University assistant professor Peter Howe, who has researched public perceptions of climate change, said. "I would also caution, though, that perceptions and experiences of local climate conditions appear to be related to some extent by pre-existing beliefs about global warming."

Along with rising tides caused by rising temperatures, intense heat and heat waves are the clearest signs so far that human activity is altering the climate. A suite of modeling studies have independently concluded that heat waves that ravaged Australia in 2013 would have been almost impossible without the warming effects of our greenhouse gas pollution. Scientists have also directly linked record-breaking heat in Europe with global warming.

Meanwhile, California’s record-breaking heat last year, which some research links more closely with ocean cycles than with global warming, substantially worsened the drought-inducing effects of low rainfall and snowfall rates. That’s a problem that will continue to worsen fire risks throughout the American West, and much of the rest of the world, as temperatures start to really spike. That could threaten the survival of entire ecosystems,including the spectacular high-altitude forests of the American Southwest.

This concern dovetails with recent research finding that our oceans' capacity to absorb atmospheric heat has peaked and is waning.  The oceanic heat sink that we've so relied upon may be less reliable than we had hoped.

So, brace yourselves.  The heating spike may be up to 5-years off which provides some opportunity to do things such as heat-proofing the house or going for that heat pump option.

Are you sure you want to use " Soon " in the lead of a reality based piece?