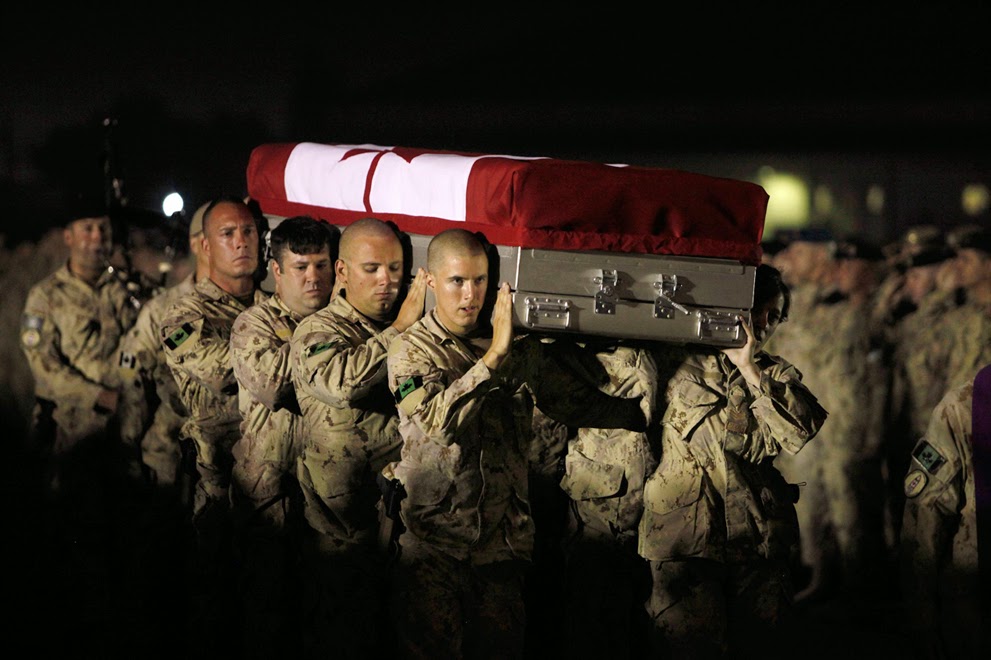 Canada has taken upon itself the role of an essential player in military conflicts overseas.  We've played with the big boys in Kosovo, Afghanistan, Libya and now Iraq and the Baltics.  We've lost lives, we've spent a fortune and we've left our military pretty much clapped out.

As for Canada, Harper has gone for deficit fighting rather than funding the rehabilitation of Canada's military.  Our navy is at something resembling its state pre-WWII.  The air force is an open question.  Harper still wants to saddle the air force with a warplane that offers little to nothing for the defence of Canada.  The army has a shopping list for replacement kit as tall as the Peace Tower.

Plainly Harper's defence policy at home is about as successful as his military adventures overseas.  To his neoliberal instincts, defence policy is about as relevant as foreign policy, except in the context of trade.  What our defence policy actually achieves is nowhere near as important as making role call with the big boys.  From that vantage, whether there's anything lasting to show for your efforts in the countries you've bombed, invaded or garrisoned is of no particular moment.

We know the biggest obstacles to peace in the Middle East are the Palestinian peace initiative and the undeclared Islamic civil war pitting Sunni against Shiite.

The first obstacle, the Palestinian question is dead for the foreseeable future. Netanyahu ran on a promise there will be no Palestinian state on his watch and he's promised to accelerate the construction of ever more settlements in the illegally occupied Palestinian territories.  Where can he go from there except the seizure of all of Jerusalem and the expulsion of the Palestinians from "biblical Israel"?

On the Islamic civil war, there is no conceivable reason we should allow ourselves to get drawn into that one.  The side we're allied with, the Sunnis, is the same side whose people blew up the US embassies, bombed the USS Cole, knocked down the World Trade Centre and formed the Taliban, al Qaeda and ISIS.  It's the same side that sent so many of our young soldiers home in boxes.

Which begs the question why Canada should participate in these Mid East and eastern European follies at all?  We don't make a lot of worthwhile friends out of it but we sure seem to make a lot of enemies who may just want to pay us back for those bombs and shells and bullets.  Maybe enough is enough.

Let's stop playing in the sandbox of foreign lands.  Let's focus on something valuable, the security of Canada.  Wouldn't it be a dandy idea to have some capability to defend Canada's three ocean coastline, our airspace, our landmass especially the vast, sparsely populated north?  It's going to take a lot of money to do that, money that we've been pissing away in the Middle East and eastern Europe only to achieve bugger all in the result.

I'm not sure Libya qualifies as a failed state. Well, not yet anyway...

.. outstanding analysis and summary observation..
Its critical to ensure Canadians are aware how our current government sees Arms Industry Exports as hand in hand with.. no, superceding, Foreign Policy.. and what used to be Diplomacy. Recent articles quote high ranking Harper cabinet stating Arms & Arms Exports are to be 'key drivers' of Canada's economy in the future..

Good point, Sal. As it happens just yesterday I waded through a British report on the role of weapons exports as a dominant element of foreign policy. Get it wrong and you've got an immense amount of innocent blood on your hands.

Our reaction to the mega-deal with the Saudis for Canadian built armoured vehicles suggests that we have an ill-formed appreciation of the ongoing responsibility that comes with flogging deathware to suspect types.

Anonymous: Where have you been?! No operational central government or system of governance or government services, a multi-front civil war, atrocities and massacres left and right, about ten thousand different militias squabbling over who runs what hamlet, smuggling weapons and exporting terrorism to everywhere in the neighborhood . . .
I can't think of any aspect of Libya as a state that has not failed. If that isn't a failed state, I'm not sure what would qualify.