Netanyahu Promises Israeli Voters - There'll Be No Palestinian State On My Watch. 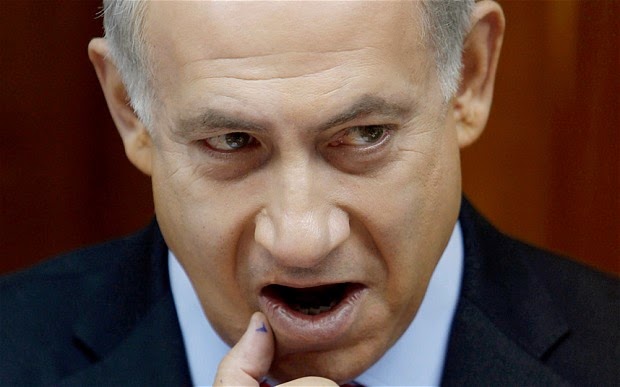 With Israelis heading to the polls, Benjamin Netanyahu is running scared.  He's seen Likud's numbers and all the polls show he's in trouble.  He's in deep enough that he's pulling out all the stops and scrambling for the hardliner vote.

Prime Minister Benjamin Netanyhau said Monday that if he were to be reelected, a Palestinian state would not be created, in a definite disavowal of his 2009 speech, in which he had voiced support for the principle of two states for two peoples.

Netanyahu's remarks in an interview with the NRG website - which is owned by casino mogul [and Bibi owner] Sheldon Adelson and tied with the settler newspaper Makor Rishon - were a last-minute attempt to pull right-wing voters away from Habayit Hayehudi.

The Israeli newspaper, Haaretz, also reports that Middle East envoy, Tony Blair, is about to resign.

In 2014, a group of former British diplomats and political figures wrote an open letter calling for Blair's resignation from his role as the Special Envoy of the Middle East Quartet, citing, among other reasons, his "blurring the lines between his public position as envoy" and his private business dealings in the region.

Israelis vote tomorrow but it won't be clear whether Netanyahu could keep post even if Likud emerges trailing Zionist Union by three or four seats.  With nearly a dozen parties expected to pick up seats there's enormous room for horse trading.  Of course our Mr. Harper won't hesitate to embrace a Likud coalition even if he denounced the legitimacy of the very same thing in Canada.
Posted by The Mound of Sound at 10:05 AM

Recall that Harper had said that losers do not get to form coalitions; http://www.ctvnews.ca/losers-do-get-to-form-coalitions-constitutional-experts-1.519108

Let us remind Harper of that if Likud does get the second highest number of seats but then refuses to relinquish power by forming coalitions with other right wing parties.

BTW, Mound, on another topic, polling. Did you see this: http://www.nationalnewswatch.com/2015/03/14/a-voters-guide-to-political-polling-in-this-2015-federal-election-year/#.VQcp_fJFB9A ?

This is what it says about self selecting, online panels: "By opting in, panelists may provide pollsters with a detailed profile (such as age, gender, income, employment, locale, and even banking and shopping preferences) that can then be used to build samples for particular surveys. This is a great tool for doing targeted market research but is problematic when trying to survey public opinion at large.

"Most of the companies doing Internet surveys claim that they can do sleight of hand with statistics to fix the fact that they don't actually have random samples. And they can't," says Krosnick. "There's actually no way to do it."

Thus even when the online surveys claim that they have selected "randomly" from their panels, they clearly still have not performed random polling and their results would not be truly representative of the public response.

Pity that so many in our MSM (e.g., Andrew Coyne, who had quoted the G&M claim that the Angus Reid online panel survey indicated 82% "public support" for Bill C-51), are either ignorant of this, or are too lazy to educate themselves on the dubiousness of the online panel methodology.

Thanks for the info and the link. You might remember that Harper was just fine when Australian John Howard also "lost" the election but was able to claim power via a coalition.

What bothered me most was how duplicitously our media parroted Harper's claim that a coalition here would be unconstitutional, some sort of a coup. It was blatantly untrue and yet they freely disseminated his lie.