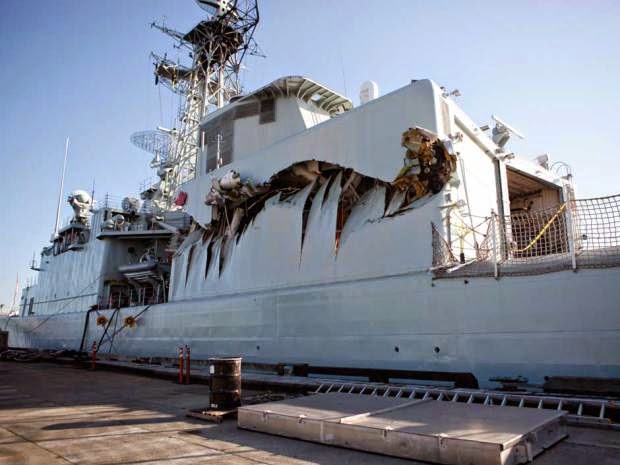 It's the usual story.  The federal government talks a good game but it's just empty talk. A glaring example is Canada's military.  Harper came to power promising to build up the Canadian Forces into a war waging, ass kicking powerhouse.  Rick "The Beached Cod" Hillier praised Harper to the rafters for rescuing the forces from their "decade of darkness" under the Liberals.

Today the boast is burst.  Harper has his own stealth programme, quietly defunding the military.  As Liberal senator Colin Kenny has pointed out, Harper won't downsize the military to meet his budget cuts, unemployed soldiers would be hard to conceal.  Instead he's just allowing their equipment to fall apart as already overdue replacement is stalled.

Jean-Denis Frechette, the parliamentary budget officer, says the federal government will need to either pour more money into its defence budget, scale back its ambitions, or do a mixture of both in order to put Canada’s military on a sustainable footing.

The Harper government currently spends $21.5 billion on defence — or 1.1 per cent of the gross domestic product.

In order to sustain the existing number of troops, bases, tanks, planes and ships, the budget office says the Conservatives will have to spend about 1.6 per cent of GDP, which would be an increase of at least $3 billion annually.

“The model shows that it was only with the significant spending increases seen in the latter half of the 2000s that the affordability gap was closed and capability was able to be maintained and to some extent re-built. However, the recent cuts to the defence budget point to an impending affordability gap beginning in this fiscal year.”

That affordability gap — or shortfall — runs anywhere between $33 billion and $42 billion.

Frechette said, under the current budget structure, the government can afford a military about the same size it had in 1999, at the height of what the Conservatives have often described as the “decade of darkness” under the Liberals.

The Great Economist doesn't seem to understand that you can only play war war if you're ready to pay pay.  Ask the Royal Canadian Navy.  They can't sally forth to defend even one of Canada's three coasts because their air defence destroyers and provisioning ships are at dockside preparing for their next life as artificial reefs.

It speaks volumes of the character of Stephen Harper that he shamelessly squeezed every drop of political capital possible out of the dead and broken bodies of Canadian troops in Afghanistan and then dumped them when they were of no further use to him.  This while Vlad Putin is aggressively contesting the skies and the seas, especially in the Arctic where Canada stands wholly unprepared.

About the only thing they have not cut, Mound, is their rhetoric and their advertising budget to spin it.

Personally, I'm all for not spending much on the military. But I'd want the money we did spend to be spent, well, sanely. Ideally after figuring out what kind of missions we want to do and can afford (I'm thinking, patrolling our coasts and stuff, generally keeping an eye on the borders) and devoting the money to being able to do that well.

You know, define what the military is supposed to do and then equip them to do it. And yeah, recognize that if what you want it to do is play war with the big colonial boys, that will mean big dollars. Although even there--if all we want to do is help the US bomb relatively defenseless people and do a bit of ground troop support, I still say we could buy us some A-10s for a relative pittance and check that box right off.

They'll always have funds to hand for the production and dissemination of raw bullshit, Rural.

@ PLG - you just don't get it with your childish rejection of belief based decision making and your stubborn insistence on logic and critical thinking. Those aren't "real Canadian values."

We will soon match the British. Due to budgetary wizardy they will build a new aircraft carrier but decommision it before it sails. See they can afford to build it but not sail it and it would cost more to cancel it than to more forward. Then they will buy VTOL F35 to be used on this aircraft carrier which does not sail. So the planes will have no mission.

For me the Libyian flyby should be the image Canadians think aboot next election.