Think You Don't Live On a Spaceship?


If humankind ever does establish a settlement on another planet the colonists will have to grow food. When they do it will look something similar to this: 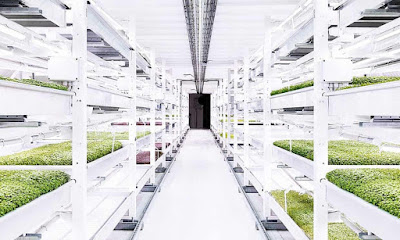 But this farm isn't on Mars or some even more distant planet. It's a repurposed bomb shelter 33 metres beneath Clapham High Street in London.

Civilization has become so bloated that we now need to farm beneath our cities, on the rooftops of our downtown buildings. At the moment it's a novelty but with the rapid and ongoing degradation of the world's arable farmland this could become a necessity and, when it does, we may just get a sense of what life might be like if we colonized another planet after having exhausted this one.
Posted by The Mound of Sound at 6:32 AM

It's a novelty because it's not viable except as a novelty. It requires massive expense to set up and solid infrastructure to keep going; it requires artificial lighting and cheap, effective waste disposal. Basically, you need way more input than you get of output, unless someone invented perpetual motion while I wasn't looking.

So if we ever are driven to such expedients, we're hooped. You can only make money on something like that if you're growing high end herbs and veg for expensive restaurants and millionaires' servant-tended fridges in a stratified society.