A Turbulent Sea of People 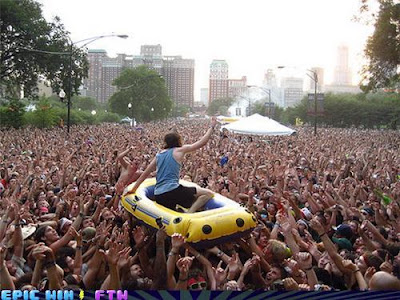 Around the world nations are being seriously destabilized by the combined impacts of climate change and food insecurity.   One factor in this is population density, the number of people a nation must somehow provide for within a fixed area.

Canada has a population density of 9 people per square kilometer.   Australia comes in at 8.   The United States, 34 per sq. km.   Around the world the picture is far different.

From 650 to 300, the list comprises Taiwan, South Korea, India, Japan, Sri Lanka and the Philippines.

What should be sending up the red flag is the number of countries on this density list that are considered most vulnerable, particularly in the short term, to the impacts of climate change and other environmental challenges.   They make up the overwhelming majority of the countries listed.   In other words, around the world the most densely populated countries also appear most likely to take it in the neck from climate change and other ills.

This list also includes the emerging economic superpowers of India, China and Mexico plus the industrial powerhouses of Taiwan, Japan, South Korea, Malaysia and Indonesia.   These are also countries where per capita consumption is rising very quickly.  And, leaving the U.K. and France aside, four of them - China, India, Pakistan and North Korea - have nuclear arsenals.
Posted by The Mound of Sound at 11:11 AM

But the majority of Canada is pretty much unpopulated, what would the desnisty be in populated areas, such as Toronto, Vancouver, Quebec, etc? For comparisons sake? It is a fair argument, but Canada is a vastly unpopulated land, so it's hard to get a sense of the density.

I understand what you're saying but urban densities aren't helpful for comparisons.

If you go to the Global Footprint website you can find a nation by nation analysis of population and biomass. In their comparison, biomass means a country's capacity to generate vegetation and cleanse its biosphere of man-made contaminants.

Only three or four countries are in the black, Canada being one of them. For the others, their biomass deficits are made good by importing products and resources from abroad or resorting to conjuring tricks such as the excessive use of pesticides, fertilizers and irrigation that eventually fail.

It's troubling that this factor - the "eating our seed corn" factor - is routinely omitted from our economic and climate projections. We wind up addressing problems in isolation that are actually quite powerfully connected. And then we wind up perplexed that our fixes fail.

I am in the photograph included in this entry. To the left, in the crowd near the front of the stage. The performer's name is Girl Talk and this took place at Lollapalooza in 2008.