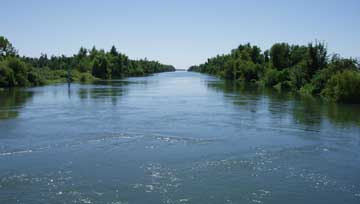 One of the great successes of the international community was the U.N. Convention on the Law of the Sea hammered out following negotiations that lasted from 1973 until 1982.

Now we are facing similar, perhaps even greater challenges with rivers and relations among the nations they pass through.   A classic case is the Nile where the upstream countries are constructing dams that could threaten Egypt's access to freshwater for irrigation needed to support the country's agriculture.

Iraq is another country facing imminent and potentially devastating problems by the interception of upstream waters of the Tigris and Euphrates Rivers by Turkey and Syria.

The greatest and potentially most dangerously volatile riverine threat relates to the Himalayan headwaters of the great rivers upon which nuclear-armed Pakistan, India and China are totally dependent.   Any guesses why China invaded, conquered and insists on controlling Tibet?

Even the United States is having serious internal problems, particularly in the southwest, concerning sharing of river waters among competing states.

"More than 40 percent of the world’s people live in 263 river basins that straddle international borders. The Danube, Rhine, Congo, Nile, Niger, and Zambezi rivers all pass through nine or more countries. Transboundary rivers contain 60 percent of the world’s river flows — for two-thirds of them, there are no agreements on water sharing.

"This is dangerous. Guinea threatens to barricade the River Niger, which could dry out the inner Niger delta, a wetland jewel on the edge of the Sahara in neighboring Mali. In September, Vladimir Putin visited the mountain states of Tajikistan and Kyrgyzstan in Central Asia, where he announced financial backing for more dams on the Amu Darya and Syr Darya rivers to generate hydropower in those countries. But he ignored opposition from downstream Uzbekistan and Kazakhstan who fear the dams will deprive them of summer flows to irrigate their cotton crops.

"Water is today the most important global resource that does not have any international agreement, says World Bank lawyer Salman M.A. Salman. Abstractions of water from rivers have tripled in the past 50 years, mostly for irrigation. The entire flows of some rivers are now being taken for human use. And the natural flows of many others are disrupted by hydroelectric dams that only allow water to pass when the dam owners want electricity.

"Back in 1997, the UN adopted the Convention on the Non-Navigable Uses of International Watercourses. It did not lay down hard and fast rules for sharing waters, but it was a statement of principle that nations should


In refusing to sign a UN treaty, China asserted its sovereignty over waterways flowing through its territory.

ensure the “sustainable and equitable use of shared rivers.”

"Only three countries voted against: China, Turkey and Burundi — all of them upstream countries on major rivers. China is the water tower of Asia. Its Tibetan plateau is the source of the Indus, Brahmaputra, Irrawaddy, Salween, and Mekong rivers. But in refusing to sign the treaty, China asserted that it had “indisputable territorial sovereignty over those parts of international watercourses that flow through its territory.”

"To come into force, the treaty required 35 nations to ratify it in their legislatures. To date only 28 countries have done so. Other refuseniks include the U.S. and Britain, an original sponsor of the treaty. But the momentum for ratification is picking up. Eight of the 28 ratifiers did so in the last three years. France has become a cheerleader for the convention.

"Meanwhile the treaty has a counterpart: the Helsinki convention. This began as a 1992 deal on river cooperation between European nations under the UN Economic Commission for Europe. But at a meeting in Rome set for Nov. 28-30, its members are likely to vote to allow any nation to join. Early potential signatories include Iraq and Tunisia.

"France’s Thebault says the two treaties could complement each other. For while the 1992 treaty is a statement of principle about water sharing, the Helsinki convention is “bolder,” with formal arrangements for drawing up deals.

Also on the agenda for the Rome meeting of the Helsinki Convention is the devilish problem of sharing groundwater resources.   This is a powerful issue that, barring international pressure, could prevent Israel from ever yielding the West Bank to the Palestinian people.

One of the most potentially devastating impacts of climate change is the wild alteration of our planet's hydrological cycle.   A warming atmosphere carries more water vapour, and the energy that goes with it.   That results in more storms of greater intensity and destructiveness and radically altered precipitation patterns leading to more droughts in some places and more floods in others.

This is already well progressed which means we need to talk quickly and to find an equitable way for sharing the Earth's water resources.    And, yes, that's going to mean what the radical Right loathes - the notion of treating a fundamental natural resource as a Commons.   And, yes, that could well set a precedent for treating other resources and assets as Commons.   And, yes, we may not be able to survive without it.
Posted by The Mound of Sound at 11:04 AM