Are Things Heating Up in the Himalayas?

For a while, India and China even claimed to have finally settled their dangerous border dispute.   If they ever had a deal, it seems that deal is in doubt.

The land in question is the northernmost Indian state of Arunachal Pradesh and the Himalayan region of Aksai Chin.   In new Chinese passports those regions are shown as belonging to the People's Republic.   India has responded by stamping the Chinese passports with its own map showing the regions as Indian. 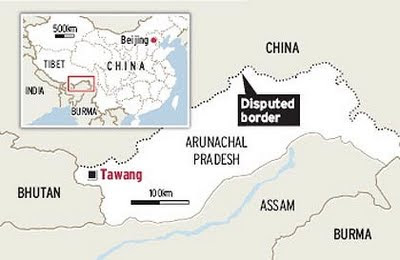 China and India went to war along this border in 1962.  Since then India has claimed China has illegally occupied its territory in Aksai Chin while China has claimed the state of Arunachal belongs to it.

There is a great deal at stake up here including access to freshwater resources both countries deem vital.
Posted by The Mound of Sound at 6:59 AM

It was that dispute, as I recall, that led to India becoming a nuclear power, Mound.

As their economies improve, these neighbours could begin to flex their muscles.

That area, Owen, is the burning fuze in Asia's powder keg. Access to fresh water is becoming increasingly tenuous in Pakistan, India and China. All three are nuclear weapons states and all have contested claims to Himalayan headwaters. Water woes could some day trip the military threshold in Asia.

Thanks for sharing, this post represents a great deal at stake up here including access to freshwater resources both countries. Air Conditioning Repair Portland