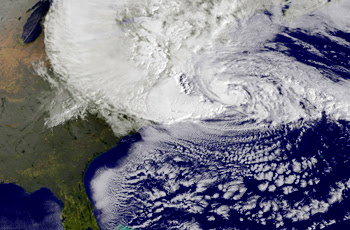 The U.S. National Centre for Atmospheric Research reports they, and the larger scientific community, got it wrong.   Once again they erred on the conservative side resulting in unduly optimistic projections.

Now, NCAR warns, we're in for higher than expected temperatures and, with that, more extreme weather sooner than previously forecast.

The analysis by the US National Centre for Atmospheric Research (NCAR) found that climate model projections showing a greater rise in global temperature were likely to be more accurate than those showing a smaller rise. This means not only a higher level of warming, but also that the resulting problems – including floods, droughts, sea level rise and fiercer storms and other extreme weather – would be correspondingly more severe and would come sooner than expected.

Scientists at the NCAR published their study on Thursday in the leading peer-reviewed journal Science. It is based on an analysis of how well computer models estimating the future climate reproduce the humidity in the tropics and subtropics that has been observed in recent years. They found that the most accurate models were most likely to best reproduce cloud cover, which is a major influence on warming. These models were also those that showed the highest global temperature rises, in future if emissions of greenhouse gases continue to increase.

Slowly, perhaps much too slowly, our leaders are coming to recognize, publicly, that we are indeed holding a gun to our own heads.   Unfortunately, translating that sort of acknowledgement into the type of action needed to effectively respond, is something that has eluded civilizations in the past.   There is a vast and powerful inertia to be overcome and corporatist governments are particularly ill-suited to challenging the status-quo.
Posted by The Mound of Sound at 9:09 AM

The forces of Denial have big money on their side. Who will speak for Nature?

Re: Who will speak for Nature?

The though of a storm like Sandy or Katrina, every year. That certainly focuses the mind.
Googled around for a bit trying to find information on how many storms like Sandy can we expect in the future, and found little. The search parameter was 'How many storms like Sandy can we expect in the future?'
Found an article with the claim from an insurance company that said there's been an increase in hurricanes by four times since the seventies, and that in the future, communities might become uninsurable.
http://www.npr.org/2012/11/04/164185424/insurance-companies-rethink-business-after-sandy
Found another interesting article discussing how many barrels of oil is gained from spending a single barrel of oil. It also discussed the ratio of when it's unproductive to produce oil, anymore, which is 3:1. We're currently at 11:1, right now, according to the article.
http://qz.com/24572/sandy-as-a-glimpse-into-our-future-americans-should-prepare-for-a-scarcity-of-resources-and-a-fight-for-survival/
Interesting stuff, but not at all what I wanted. So, I changed my search parameters: 'Hurricane Sandy + future'.
A decent result: http://www.livescience.com/24496-hurricane-sandy-new-york-future-superstorms.html
It has a claim a storm such as Sandy might be one in a thousand years. It also claimed, though, the flooding Sandy caused was once in a hundred years, but that number is changing because of climate change. Once a hundred years becomes once every three to twenty years. Although the attribution in the article is awful, it's the only one that offers any prediction, whatsoever.
There was another interesting article about dying satellites, and the havoc they'll wreak on climate change modeling:
http://www.smartplanet.com/blog/bulletin/in-the-future-hurricane-sandy-is-invisible/3982
All interesting, and grim.

I'm with Willy, Owen. I think Nature is speaking for itself and quite forcefully.

@ Troy. Thanks for all the links. You're a ray of sunshine today. But I fear some of the dire predictions could be right or probable enough, at least, that we would be prudent to ask, "what if?"

We are only just beginning to explore and understand the likely mid- and long-term impacts the loss of Arctic sea ice will have on climate conditions in the northern hemisphere.