The Moral Fragmentation of the Liberal Class 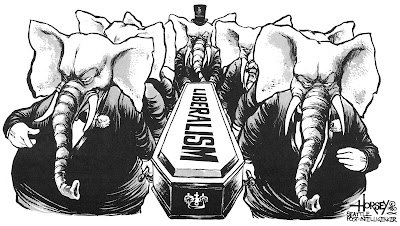 The presidential election exposed the liberal class as a corpse. It fights for nothing. It stands for nothing. It is a useless appendage to the corporate state. It exists not to make possible incremental or piecemeal reform, as it originally did in a functional capitalist democracy; instead it has devolved into an instrument of personal vanity, burnishing the hollow morality of its adherents. Liberals, by voting for Barack Obama, betrayed the core values they use to define themselves—the rule of law, the safeguarding of civil liberties, the protection of unions, the preservation of social welfare programs, environmental accords, financial regulation, a defiance of unjust war and torture, and the abolition of drone wars. The liberal class clung desperately during the long nightmare of this political campaign to one or two issues, such as protecting a woman’s right to choose and gender equality, to justify its complicity in a monstrous evil. This moral fragmentation—using an isolated act of justice to define one’s self while ignoring the vast corporate assault on the nation and the ecosystem along with the pre-emptive violence of the imperial state—is moral and political capitulation. It fails to confront the evil we have become.

...The ineffectiveness of the liberal class, as I saw in the former Yugoslavia and as was true in Weimar Germany, perpetuates a dangerous political paralysis. The longer the paralysis continues, the longer systems of power are unable to address the suffering and grievances of the masses, the more the formal mechanisms of power are reviled. The liberal establishment’s inability to defy corporate power, to stand up for its supposed liberal beliefs, means its inevitable disappearance, along with the disappearance of traditional liberal values. This, as history has amply pointed out, is the road to despotism. And we are further down that road than many care to admit.

...For a poor family in Camden, N.J., impoverished residents in the abandoned coal camps in southern West Virginia, the undocumented workers that toil in our nation’s produce fields, Native Americans trapped on reservations, Palestinians, Iraqis, Afghans, those killed by drones in Pakistan, Yemen or Somalia, or those in the squalid urban slums in Africa, it makes no difference if Mitt Romney or Obama is president. And since it makes no difference to them, it makes no difference to me. I seek only to defy the powers that orchestrate and profit from their misery.
The oppressed, the more than half of the world’s population who survive on less than $2 a day, will be the first to be sacrificed because of our refusal to halt fossil fuel’s degradation of the natural world and the assault of globalization. They already hate us with a righteous fury. They see us for who we are. They also grasp that for power to be threatened it must be confronted by another form of power. They know that the only way to effect change is to make the powerful fear their ability to retaliate. And the oppressed, inside and outside empire, are methodically building that power. We saw it at work on 9/11. We see it every day in Iraq and Afghanistan. And we will see it, although I pray it will be nonviolent, on our own city streets.
Posted by The Mound of Sound at 11:32 AM