Can't They See How This Ends? 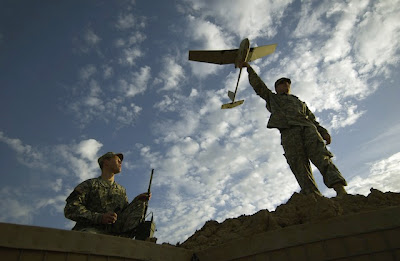 The U.S. military has really fallen for this remote-controlled mayhem business.   The latest and greatest thing is the miniature, one-way drone.  It has a range of between 6 to 10-miles, it can loiter over the target from 10 to 30-minutes, and then it ends its service life by flying into the ground, detonating a couple of pounds of high explosive.   Some can be controlled by a ground operator sitting in the safety of a cozy bunker.   Others can use GPS guidance.   Others might even be robotic, flying to the designated spot and waiting until it detects something with the parameters of an enemy target - or a wedding party, something that needs killing anyway.

There are just a few problems with this.   One is that only so many will work before you have a dud and duds usually wind up in the other guy's hands.   Then the other guy gets to learn what makes them tick, how to build his own and, as often as not, how to make one even better than yours.

Another drawback is that small and disposable inevitably means cheap and that plays into your intended adversary's hands when you're rich and he's poor.   He won't be building a B-2 bomber any time soon but he can probably scratch up enough cash to start churning out your cheap and dirty whiz-bangs in big volume.

And being small means being relatively easy to smuggle so you can bet the farm your new device will be arriving in Gaza and the West Bank in no time or even outside your own base in Afghanistan or maybe in downtown New York or Washington.

In other words, you're developing the perfect weapon - for your enemy.  Brilliant.
Posted by The Mound of Sound at 5:17 PM