Now Tell Me Why We Need to Push Bitumen on the World?


"Twenty-seven or younger? Then you’ve never experienced a month in which the global temperature has been colder than average, according to the latest data from the U.S. National Oceanic and Atmospheric Administration."

Here's the dandy graphic to go with that: 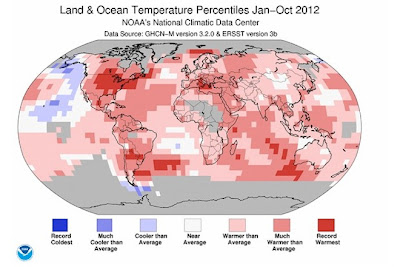 In NOAA’s monthly “State of the Climate” analysis, the agency reported: “The average temperature across land and ocean surfaces during October was 14.63°C. This is 0.63°C above the 20th century average and ties with 2008 as the fifth warmest October on record. This is the 332nd consecutive month with an above-average temperature.”

This is global data, of course, and the pattern is rather more complex at a local level. In fact, the average monthly temperature in Britain in October was 1.3 degrees Celsius below average, making it the coldest October since 2003. Scotland had its coldest October since records began in 1910.

Now here's a fun game for you readers.   Why don't you subtract 27-years from your own age and remember your own life  332-months ago.   Try to visualize what you've gone through, all the things you've accomplished, over this interval while the Earth steadily warmed.