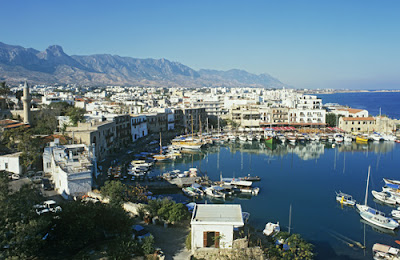 Cyprus, it seems, is the Cayman Islands of the Mediterranean.  Russian oligarchs are said to use it to launder their money.   And, for the European Union, the Cypriot-Russian connection complicates efforts to bail out the financially-stricken island.  Der Spiegel reports that German intelligence has warned that bailing out troubled Cypriot banks may effectively amount to bailing out Russia's oligarchs and their under the table money.

Last Friday, the sun was shining in this paradise for Russians. The sky was a deep blue and the palms along the beach promenade swayed in a light breeze as the the temperature climbed to 29 degrees Celsius (84 degrees Fahrenheit) before noon. No doubt Limassol offered a welcome relief from the cold and wet autumn weather of Moscow. Russians appreciate this spot on the southern coast of Cyprus.

The boutiques sell sable coats even in summer, the restaurants serve salted herring and vodka, apartments near the pier cost upwards of €300,000 ($383,000) and there's no shortage of luxurious villas priced at millions of euros.

The city park has a bust of Russian poet Alexander Pushkin, there's a Russian radio station, Russian newspapers, a Russian Orthodox church, private schools offering Russian diplomas and signposts in Cyrillic writing. The mayor of Limassol himself speaks fluent Russian and studied in Moscow during the Soviet era.

[Now these wealthy Russians] are at risk of losing their paradise because Cyprus is virtually bankrupt. The island's economy has been dragged down by the recession ravaging Greece, with which it has close business ties. In addition, Cypriot banks bought billions of euros in Greek government bonds that are practically worthless now. The banks have already had to write off large portions of their investments, and are in trouble as a result.

...Now the euro countries, and especially Germany, will have to step in with a €10 billion aid injection to prop up the island's banks. That will confront German Chancellor Angela Merkel, Finance Minister Wolfgang Schäuble and their European colleagues with a major dilemma because a secret report written by the German foreign intelligence service, the Bundesnachrichtendienst (BND), outlines who would be the main beneficiaries of the billions of euros of European taxpayers' money: Russian oligarchs, businessmen and mafiosi who have invested their illegal money in Cyprus.

The Russians don't just love Cyprus for its great climate. The shell companies here are conveniently anonymous, the banks discreet and the taxes are low. Dirty money bestowed a lasting boom on Cyprus and the inhabitants of "Limmasolgrad" are still doing well.

So there is the European Union's conundrum.   Cyprus has, in some respects, become a sort of criminal enterprise yet the E.U. may still have to step in to prop it up.  Yikes.
Posted by The Mound of Sound at 9:41 AM