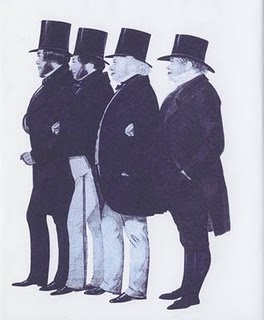 These people see Steve as a manager, an administrator, a petit fonctionnaire.    They don't embrace Steve's vision for the country.  They don't perceive that he has one.   Yet that seems to be okay to them, at least for now.   Steve's approval ratings seem to bear that out.

What happened to leadership and vision?   When did these qualities become irrelevant to the electorate?   Steve doesn't lead, he rules.  He governs almost by fiat.  His management skills seem to ape those of a mob boss.   One man rule implemented through a small network of capos supported by foot soldiers in the backbenches.

Steve's approach to parliamentary democracy also shares parallels to a mob boss's approach to the criminal justice system.   Both seek to circumvent, obscure, manipulate and undermine the systems that might otherwise thwart their ambitions.

Here's another parallel, one that should but doesn't matter.   Mob bosses infiltrate labour unions that are supposed to serve their members and, instead, put them into service to the mob.   Steve Harper has taken a similar approach to the public service that, by its very name is supposed to serve the Canadian public, and he has transformed it into his personal partisan political agency.   In other words, both are corrupters on a grand scale.

In so many respects, Steve is a thug.   There's really no other way to describe him.   Yet, to those not already disengaged from federal politics, he's okay - at least for now.

But, when they look at Steve and his rivals, what do they see?  Probably about the same thing I see, a wall of grey characters in grey suits all trying to crowd into the middle.   Opposition?   What opposition, where, who?  They're all vying for Steve's job, not the job of leader of Canada, not the leader to energize the Canadian people.   They don't present any vision.   They don't speak to the troubles besetting our nation and our people.   They just want you to give them Steve's job.

And that is precisely what Steve is counting on, his ace in the hole.  The leadership of the opposition parties has been instrumental in Steve coming to power, holding onto power and ascending to a majority.   They have facilitated Steve's coronation.   And now they owe a duty to the Canadian people to find a way to topple the king.  It's a tricky job, full of risks.   It can't be done without courage and vision.

There's an easy way to tell who isn't up to this task.   Anyone who is more intent on playing it safe than on taking Harper down is doomed to fail.   There is no safe way to get rid of Harper.   The only one who can hope to succeed is the person who actually stands for something, who speaks of a vision that resonates with the Canadian public and who is prepared to defend that vision against the inevitable onslaught of the Harper forces.  It's a risky proposition and it's going to take a person of the calibre we see so rarely in politics.  It's going to take a real king slayer.
Posted by The Mound of Sound at 11:16 AM

very effective comparison. And of course if we continue the metaphor we realize just how difficult it is to topple a guy like Harper. Mobsters rely on the loyalty of their peons and it is always a disgruntled peon who brings them down. Harper probably won't fall until one of his little men finally turn against him.

Harper is probably more secure vis a vis his caucus than ever. He delivered the goods and that's all that matters.

Waiting for Harper to be brought down by his own has been the signature tactic of the Libs and NDP since he came to power. How well has that worked?

It's Harper's rejection of leadership, his lack of vision, that is his true Achilles' Heel. He really operates in a narrow, shallow political band and recoils at stepping beyond that. This is the opportunity his rivals have but only if they're competent to stand and force Harper to come outside to fight a battle of visions.

KC, this is the reason I so wish Louise Arbour would run to become Liberal leader. She's bright, fearless and has handled plenty of characters far tougher than Harper, including the Cheney White House. She has vision and is a fierce defender of principle. She would make an ideal king slayer.

Yes Mound, one needs leadership opposition to bring down someone like Harper, but in the end such leaders almost always lose the support of their own and that precipitates the crisis. It was that way with Thatcher and Nixon for example.

An excellent post, Mound. Harper's success is based on bland, willful ignorance.

Yes, Owen, but first that person will have to overcome the near-lethal inertia that blankets both opposition parties. It's hard to be heard over their chorus of mumbles and grunts.