When I Look At the World I Always See Canada 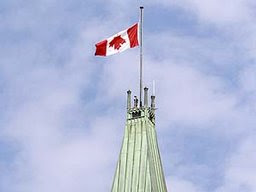 Many of us try to give ourselves a pass.   We're just a tiny country.  Less than 40-million after all.   What we do or don't do really isn't going to impact elsewhere.  We're insignificant.   We can do what we like.

As I learn more of what is going on elsewhere in the world it becomes increasingly apparent how connected we all are and how events have a ripple effect sometimes far beyond our imagining.  In today's world nobody and certainly no nation gets a pass.

When I see the scope of environmental calamity spreading through so much of the world it reinforces my determination that we act to prevent similar, sometimes even avoidable disasters befalling us.

For example, in most corners of the world there's a huge freshwater crisis building.  Air and water, without them you cannot live.  Yet there's enormous water insecurity issues, especially in the densest populated areas from south to southeast to east Asia.   Then I look at Canada which has the third-largest freshwater reserve on the planet, the Mackenzie River watershed.   Yet just a few hundred miles distant in the Athabasca region are located massive tailing ponds, in some cases lakes, loaded with bitumen mining toxins that, if breached, could devastate the Mackenzie basin.   We have this precious resource and we simply take it for granted - out of sight/out of mind.

The corporatist, petro-state that Canada has become has little respect for our ecology and grossly discounts its value.   We freely give our resources to industry instead of valuing and pricing them.  We're subsidizing industries, usually foreign-owned, with resources that legitimately belong to the Canadian people.   Water is foremost in this.   We have no tradition of pricing resources such as water at fair market values.   How then can we move on to also effectively price carbon emissions and other pollutants and contaminants?  When the rest of the world is fast running out of resources, we ought not to be giving them away for pennies on the dollar.

Social upheaval is spreading throughout the world.  The Arab Spring was not a fluke.   The riots and unrest that have hit Europe are not aberrations.   The Occupy Movement was not a passing fad, it was merely putting us on notice of a very real, very serious social problem that is not going away.  As Chris Hedges recently noted, we ignore this at our peril.

It's hard to imagine unrest sweeping Canada, hard but not impossible.   Yet we seem oblivious to the insecurity that rises out of inequality (of income, wealth and opportunity) that is both the fuel and the spark that triggers the collapse of social cohesion.  These issues have great difficulty getting much traction in a corporatist, petro-state like Canada.

Democracy seems unable or unwilling to respond to public needs and interests even in countries that we have associated with the democratic tradition.   Britain itself is a hotbed of social unrest.  Much of Europe is in the same boat.   Only Scandinavia, with its strong, social democracy seems capable of forestalling this sort of upheaval.

Democracy is not safe in Canada.   The ascendancy of the corporatist, petro-state has seen to that.   We have a thoroughly undemocratic government whose weapons of choice are secrecy and deception that keeps getting elected.   We have a mass media that has evolved into a corporate media cartel, peddling messaging in lieu of information, to do the corporatist government's bidding.   Some of us still go to the polls.  Many do not.

So where is our champion in this our hour of need?   Where is the leader who will put environmentalism ahead of industrialism?  Where is the person who will rehabilitate our social cohesion, heal the social chasm of inequality?   Where is the leader who will rehabilitate our democracy and place it in service to the Canadian people?  I don't know where that person is but I do know that it's not Tom Mulcair any more than it is Justin Trudeau.
Posted by The Mound of Sound at 8:23 AM