Drifting Ever Faster Away from 350

The figures are out for 2011 and they're record-breaking.   Last year we managed to drive atmospheric CO2 levels to 390 ppm.

The amount of heat-trapping carbon dioxide in the atmosphere reached a record 390.9 parts per million (ppm) in 2011, according to a report released Tuesday by the UN's World Meteorological Organization (WMO). That's a 40 percent increase over levels in 1750, before humans began burning fossil fuels in earnest.

Although CO2 is still the most significant long-lived greenhouse gas, levels of other heat-trapping gases have also climbed to record levels, according to the report. Methane, for example hit 1813 parts per billion (ppb) in 2011, and nitrous oxide rose to 324.2 ppb. All told, the amount of excess heat prevented from escaping into outer space was 30 percent higher in 2011 than it was as recently as 1990.

And here's what we've accomplished over the past half-century. 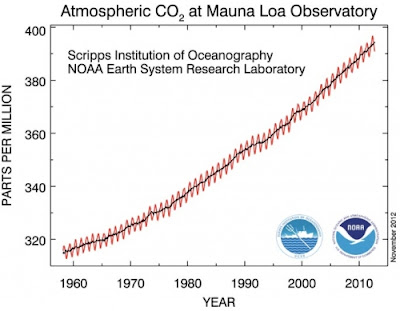 But whether you're a Liberal, a Conservative or a New Democrat, you're going to go out and vote for somebody who will pat you on the head and pay lip service to getting this under control and will then get back to boosting Canada's bitumen trafficking.

We absolutely must lay down the law with those Chinese and those Indians and their massive carbon emissions.   Except that would be the pusher criticizing the addict for drug abuse.   And besides, our per capita emissions are still way higher than theirs.   And a lot of their greenhouse gas emissions result from stuff that we have them make to fill our shelves at Wal Mart and just about everywhere else.
Posted by The Mound of Sound at 10:35 AM

Thanks for the 350 update (nightmare) Thanks also for the incredible push .. or surge .. in the volume of timely, accurate, priceless journalism and reportage emanating from your coastal outpost. You're hotter than a pistol right now..

Why an opportunistic government in waiting doesn't scoop you up along with Alexandra Morton, Raif Mair, David Climenhaga, Suzuki, Damian Gillis, 6th, Thwap, Pogge, Sask, Laila, Schindler, the Beav and dozens dozens of other honest patriots is way beyond my scope or pay grade .. (pologies to all the other indy blogs not mentioned.. you rock, you make my heart beat fast.. and the idea of 'native land .... strong and free' seems not to have been murdered..)

I commented earlier on my concerns regarding offshore or onshore seismic events and potential tsunami impacts on Kitimaat or Port Moody. Recently I became aware of an even more likely catastrophic event. I'm sure you're aware of the probability.. and the number of firefighters and petroleum workers that have died trying to defuse these detonations.

Here's an interesting 'scientific' case study - Texas
tho its a fatal variation occurring at a petro plant
http://www.youtube.com/watch?v=VCcN4SQkb9A&feature=related

None of these portray an LNG supertanker BLEVE
or an LNG 'tank farm' BLEVE or a diluent tank BLEVE
One of those might rival the Halifax Explosion
http://en.wikipedia.org/wiki/Halifax_Explosion

There are of course pipeline blowups
though this could never happen in Canada ...
http://www.youtube.com/watch?v=d-4B7DYVL2g&feature=related

Fortunately .. we have provincial and federal governments that are eliminating any such possibility via bluster, proclamation.. and FAITH .. much like North Carolina has produced legislation to defeat rising sea levels.

As someone with a near phobic reaction to praise, I thank you nonetheless, Sal. There's a great deal of really good 'citizen journalism' coming from the coast today. If you haven't found it yet, check out Island Tides at www.islandtides.com. Lizzie May has a regular column there and others, like former CBC scribe, patrick brown, also do some fine work.

As for your LNG comment. When I practiced in Vancouver I had a tower office with a splendid view of the inner harbour, Coal Harbour. Once or twice a week I would watch a tug crawl by towing barges bearing LNG tanks.

Whenever that happened I paused to realize that one accident, just then, would blow in every one of the thousands of windows just like mine and shred all the occupants in all those offices just like mine with thousands of shards of razor sharp, broken glass. And even if we were watching at the instant it happened we wouldn't have time to do a damned thing about it.