What America Needs Now - It's Own King Canute 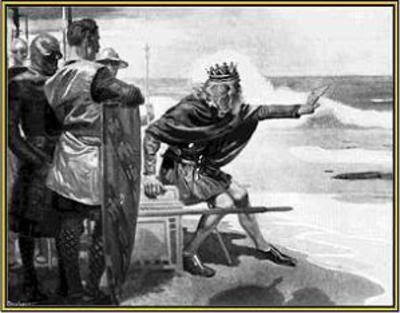 Americans are beginning to wake up to the realization that they're enormously vulnerable to the ravages of climate change.  The United States is already beset by massive flooding in some regions, protracted drought in a lot of the country, tornadoes, hurricanes, you name it.

And then there's sea level rise.  Even though some States have tried to legislate against it, sea level rise is one of those things you can't escape, can't hide.  It is what it is as the people of New York and New Jersey recently discovered.

Now there are satellite data showing that sea level rise is increasing no less than 60% faster than predicted just a few years ago by the UN's Intergovernmental Panel on Climate Change, the IPCC.   The radical right continues to scorn the IPCC as alarmist even as the panel's supposedly dire predictions continue to be proven to be understated.

"Generally people are coming around to the opinion that this is going to be far worse than the IPCC projections indicate," said Grant Foster, a US-based mathematician who worked on the paper with German climatologist Stefan Rahmstorf.

The implications are serious – especially for coastal areas of the US. Large portions of America's Atlantic and Pacific coasts are regarded as "hotspots" for sea-level rise, with water levels increasing at twice the rate of most other places on the planet.

Scientists previously had expected a global sea-level rise of 1m by the end of the century. "But I would say that if you took a poll among the real experts these days probably they would say that a more realistic figure would be more than that," Foster said.

King Canute thought he could command the sea and thereby hold it back.   Maybe the Americans can find his successor.
Posted by The Mound of Sound at 9:45 AM

To be fair to King Cnute, his toadies told him that he can do it. So he did it to show them that he can’t. Americans believe that they can.

LeDaro beat me to it. Canute showed that there were limits to the Divine power of kings by showing he couldn't control the tides. A pretty bold move for a monarch back then.

Once again, I stand corrected. Thanks.

Typo in the title--you mean "its own"; no apostrophe. Don't make me link to Bob the Angry Flower's Guide to them.

Thanks, PLG, put the boot in when I'm down. Nice. I know where your kids go to school.