What? Another Dire Report on Global Warming? 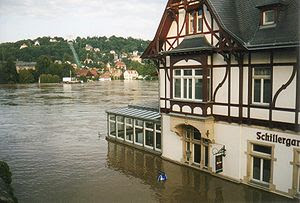 We used to get climate change reports once, perhaps twice a week.   Now they're flooding in daily.   That's not surprising given that scientific research papers on various aspects of anthropogenic global warming are now coming in at roughly five a day.

Today I'll pick the European Environment Agency.   A report by the EEA confirms that Europe is already reeling from the impacts of global warming and they're only going to get worse.

"...the agency says the past decade in Europe has been the warmest on record.

"It adds that the cost of damage caused by extreme weather events is rising, and the continent is set to become more vulnerable in the future.

"'Every indicator we have in terms of giving us an early warning of climate change and increasing vulnerability is giving us a very strong signal," observed EEA executive director Jacqueline McGlade.

"'It is across the board, it is not just global temperatures," she told BBC News.

"'It is in human health aspects, in forests, sea levels, agriculture, biodiversity - the signals are coming in from right across the environment.'"

The report finds that climate change in Europe will "deepen socio-economic imbalances" among EU countries.   Some observers have speculated that global warming could drive a wedge between warming-ravaged southern Europe and the relatively advantaged northern European states including Scandinavia, the U.K., France, Germany, Holland, the Baltics and the Benelux countries.

As these reports flood in they place the cognitive dissonance of our petro-Parliamentarians in a glaring light.   Harper, Mulcair, Trudeau - they'll all admit they know the dangers global warming poses to our country and our people and then they'll all stand up on their hind legs and speak glowingly of the bright future of our insanely high-carbon oil substitute.   That's a sign of deep-seated, political/mental dysfunction, the sort of thing that should disqualify anybody from leading a political party.
Posted by The Mound of Sound at 10:34 AM

Very interesting report and it is true that the frequency of articles concerning global warming/climate change are increasing and rightly so.

However, unfortunately we are in the middle of a social and economic break down within society, which means climate change has been placed on the back burners.

I have written several entries on my own blog pertaining to the importance of R&D in green tech and how it could greatly impact Canada's economic stance, global reputation and the overall health of Canadians.

However, going back to my previous point, we are in the middle of a social and economic break down, which means our words are heard, but not regarded.

Keep optimistic though, eventually something will have to give and change will occur, hopefully not a huge storm destroying the human race as we know it.

Anthony, your description of a time of "social and economic break down" couldn't be more apt.

Why is it, do you think, that our leadership, particularly in the supposedly progressive parties, cannot come to grips with this? My conclusion is that they must fear action more than they fear doing nothing. It's a "not on my watch" sort of thing in which problems, even potentially catastrophic threats, are simply kicked down the road for future leaders and future generations to live with.