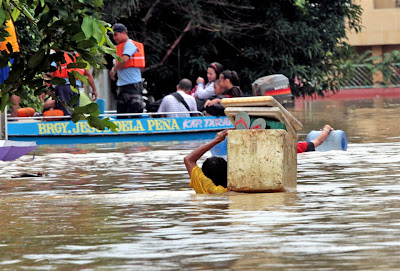 The rearguard argument of the fossil fuelers is that "we'll adapt."   Don't make a big deal out of this, we'll find ways to cope.

It's the same argument that we, the major emitters, are making to the poorest and most vulnerable nations - learn to adapt.   We're even supposed to be (but aren't) putting up hundreds of billions of dollars to help them do just that.   There, problem solved, now let's move on.

Except we're now finding that adaptation strategies tend to have a limited threshold beyond which they simply no longer work.

"People in developing countries have been learning to adapt to increasing salinity, erratic rains and, in some instances, frequent flooding as the climate changes. But a new study has taken a closer look at some of these adaptation strategies and found that, past a certain threshold, they cease to work.

The study, by the UN University (UNU) for the Loss and Damage in Vulnerable Countries Initiative, dispatched researchers to locations in five poor countries - the Gambia and Kenya in Africa; Bangladesh and Bhutan in Asia; and the Federated States of Micronesia in the Pacific Ocean.

In Micronesia, 92 percent of respondents from the island of Kosrae, where sea levels are rising at alarming rates, were experiencing adverse impacts despite their efforts to adapt. This was also true of 87 percent of farmers interviewed in Punakha District, in Bhutan, where people have been trying to cope with increasingly erratic monsoon rains. About 70 percent of rice farmers in Bangladesh’s Satkhira District say measures taken to adapt to increasing soil salinity are failing.

In western Kenya’s Budalangi Division, 72 percent of respondents living near the River Nzoia and Lake Victoria, where people are exposed to frequent flooding, said their coping strategies were not working, and around 66 percent of residents interviewed in the Gambia’s North Bank Region said they were unable to cope with drought anymore, reported Koko Warner, a scientist at UNU and scientific director of the Loss and Damage in Vulnerable Countries Initiative.

No matter how tightly we screw our eyes shut, we in the industrialized world are directly responsible for this.   These truly vulnerable people are carrying the consequences of the idustrialization from which we profited so richly.   Like it or not, fixing this will be the test that defines what kind of people we really are.


Are you in need of a loan? Do you want to pay off your bills? Do you want to be financially stable? All you have to do is to contact us for more information on how to get started and get the loan you desire. This offer is open to all that will be able to repay back in due time. Note-that repayment time frame is negotiable and at interest rate of 3% just email us creditloan11@gmail.com