America's Other Civil War - the One Breaking Out Within the GOP 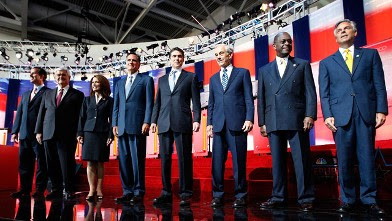 Do moderate Republicans now wish their party had chosen Santorum or Gingrich instead of Romney to take on Obama?   Some, weighing up their bitterly divided G.O.P. in the wake of the Obama re-election, think that might have been the best thing for the party.

Some believe Romney came close enough to victory to allow an even fight in the coming Republican civil war and thus ensure a protracted and painful debate that will stretch on for years. What the party really needed, some think, was to have nominated a died-in-the-wool ultra-conservative in 2012 such as Rick Santorum or Newt Gingrich who could have led the party to an overwhelming defeat, forcing the reformist wing to triumph. But the selection of Romney denied them that piece of creative destruction, even though the party has now lost the popular vote tally in five of the last six presidential elections. "They are still maybe at the early stages of denial," [University of California professor, Shaun] Bowler said.

"They look a lot more like a political party of the 1950s than a party of the 21st century," said Professor David Cohen, a political scientist at the University of Akron in Ohio. "They are at risk of being irrelevant."

Some in the party know it. Even though the corpse of the defeated Romney campaign is still warm, a bitter fight has started to break out over its meaning in Republican ranks. On one side are the modernists, who understand that the party cannot afford to be seen as a backwards-looking ghetto for white voters. On the other are the nativists, angry at a crippled and ineffective immigration system, who believe that only a true message of pure conservatism will save the day. It is a battle for the soul of the Republican party and the first shots are being fired. "I think it is going to be a war. I really do," said Larry Haas, a political commentator and former aide in the Clinton White House.

- If you happened to catch Real Time with Bill Maher last night you would have seen a preview of this as two Republican guests repeatedly went at each other while James Carville, seated between them, chuckled in delight.


The Democrats, in fact, are licking their lips at the prospect of the next four years. Obama's brilliant strategists have created a highly effective coalition of minorities, younger women voters and urban educated people. They eked out an election win in the most trying of economic circumstances by getting those people to the polls.

This might be the moment for Obama to exploit the divisions in the Republican camp by introducing badly needed but moderate, popular initiatives to force moderate Republicans to choose between their country and the radical Right of their own party.  Obama may have a golden opportunity to cut the moderates out of the radical rightwing herd.

BTW - here's a graphic from Atlantic showing the respective demographics of Romney and Obama supporters. 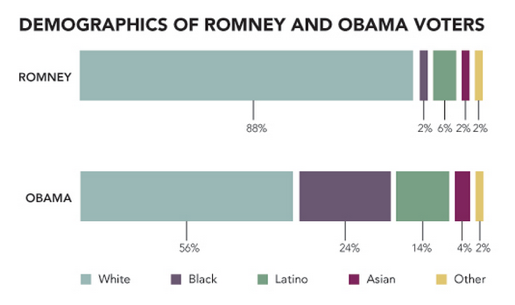