Two Near Misses in Two Days 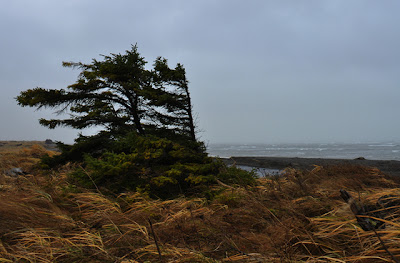 Two shipping near misses off Kitimat in two days.   Thursday the deep sea freighter, Tern Arrow, lost engine power and wound up drifting for three hours in Laredo Sound south of Kitimat.   You won't see this in any Enbridge ads but the ship was adrift in 40 knot winds and heavy seas, very far from the worst conditions that often prevail in that area.

On Tuesday night, a loaded German container ship had to alter course to dodge a fishing boat and ran aground on a sand bar south of Prince Rupert.   Fortunately it was only sand, the hull wasn't holed and the ship was able to be pulled off the sand bar by tugs.

What's important is to keep in mind that it will only take one supertanker sinking on the north coast to create truly unimaginable ecological disaster and that nobody - not Ottawa, not Alberta, not Enbridge, not our Chinese bosses - has any idea of what to do about; a spill of bitumen blanketing the rocky bottom 600 feet down.

The north coast seas are fierce.   120-knot winds can occur.   30-metre waves have been recorded.   The Hecate Strait is rated the 6th most dangerous to navigation on the planet.
Posted by The Mound of Sound at 9:56 AM

Pipeline bursts and tanker spills, do not affect the money, that goes into Harper's pocket from Red China. The pipelines will keep right on pumping. The massive tankers, can keep right on spilling.

Harper has also given Red China the right to sue, if anyone blocks the Enbridge pipeline. Canadians are not permitted to protect our own country, from an eco disaster. Alberta obviously could care less, how their dirty lethal Bitumen is forced into BC. Premier Redford is just as evil as, Harper, Enbridge and Communist China. Never, ever have we ever seen, such disgusting greed.

The best thing for BC to do is, get the hell out of Harper's Commie Canada.

I hope we can be a bit less emotional about it, Anon, but, yes, we might have to consider the merits and perils of remaining within Canada.

"Alberta obviously could care less" How easy it is for one province to denigrade the citizens of another province, as if each province is a country unto itself. There is a bi-election happening in Calgary on Monday. It is has been a very tight race between the Greens and the Liberals. But, since Trudeau's comments were dragged out from his2010 comments, it has put the Green Party candidate in good stead. What happens to those people across the country who think Albertans don't give a hoot, a darn nor care about the environment should the Greens win? Many, many Albertians are hoping the Greens take it...even the Major of Calgary having commented he is not partisan, has made comments as to how the PC candidate has conducted her campaign. It would be good if you took your biased comments and put them where they belong.