The re-election of Barack Obama triggered a flood of truly ugly, racist tweets.

A group of geography academics calling themselves the "Floating Sheep" scoured Twitter for the racist tweets and tracked them down by state of origin.   Voila. 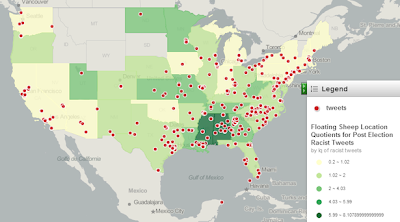 "Alabama and Mississippi have the highest LQ measures: They have scores of 8.1 and 7.4, respectively. And the states surrounding these two core states -- Georgia, Louisiana, and Tennessee -- also have very high LQ scores and form a fairly distinctive cluster in the southeast."

The article, from Atlantic, gives examples of some of these tweets.  If you feel the need, you can read them there.
Posted by The Mound of Sound at 10:53 AM

Incredible! Racism is well and alive.