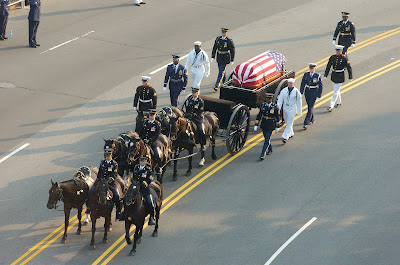 Ronald Reagan's nearly 30-year romp, or rampage, through Republican ideology, launched by a sitting president already in the throes of early stage Alzheimer's, may be over.

Reagan was, quite possibly, the greatest and most destructive bullshitter in American presidential history.    He fed his party and most of the American people a diet of raw bullshit by the shovel full and they lapped it up and made him a demi-god for it.

The Gipper was remembered for what he said, something that meant suppressing all recollection of what he actually did.   For example, when he came to power in 1981, America was the biggest creditor nation on Earth.   When he cleared out eight years later, America had fallen so far that it stood as the biggest debtor nation on the planet.

Reagan ushered in the era of Voodoo Economics featuring the utterly deranged "trickle down" theory that held cutting taxes for the rich created wealth that flowed downward to the working classes.   Even the author of that, David Stockman, now admits it was rank bullshit from the start.   Yet it's been the marching anthem of Republicans ever since and that includes one of its grandest Poster Boys, Mitch Romney hisself.   Even today the Republican Congress is well stocked with true believers aghast at the idea that the Bush tax cuts for the rich might be allowed to lapse.

Here's a little fact that most Americans overlook.   From the end of WWII until the Carter presidency, every president, Republican and Democrat, managed to reduce America's debt as a percentage of GDP.   Every one, including Johnson and Nixon during Viet Nam.

Reagan turned that on its head, swelling America's debt to GDP ratio, something continued by Bush the Elder and Bush the Minor, until America's debt-bloated economy imploded just in time for Barack Obama to arrive to clean up.

Now, having lost five of the past six elections, moderate Republicans are girding to attempt to take back the GOP from the far right radicals and Tea Party lunatics.  The New York Times' often mealy-mouthed conservative journo, David Brooks, describes a gaggle of Paleoconservatives, Soft Libertarians, Lower-Middle Reformists and Burkean Revivalists rallying to purge the Temple of the Reagan-inspired and fueled radicals.

"By and large, these diverse writers did not grow up in the age of Reagan and are not trying to recapture it. They disdain what you might call Donor Base Republicanism. Most important, they matured intellectually within a far-reaching Web-based conversation. In contrast to many members of the conservative political-entertainment complex, they are data-driven, empirical and low-key in tone."

Amen to these valuable talking points. Reagan sold a bill of goods to the US electorate that was unworkable on any level, but did so with a smile and the flag - all while destorying the PATCO union and empowering the rich in his "trickle down" approach to economics... one that never worked in the first place. History will not be kind to this man or his fetid legacy of bankruptcy and horrific economics. The time will come - some say it's already here - in which Reagan will be noted as the embarrassment that he truly is and not as some sort of tough-minded patriot with all the answers. Jimmy Carter was the patriot.