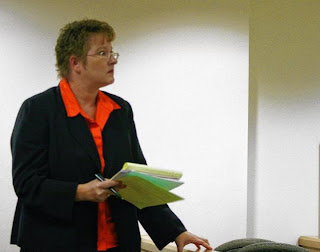 On her Facebook page, Lisa Biron describes herself as a "torch bearer of religious freedom."   She's also known for being an attorney for the Christian Right law firm, the Alliance Defence Fund, an anti-gay outfit that considers itself an anti-ACLU.

But right now Lisa may be about to add child pornographer to her C.V.


A Manchester lawyer took a teenage girl to Canada, had her engage in sexual activity and convinced her to let it be filmed, according to federal indictments.

FBI agents swiftly arrested Lisa Biron yesterday morning as she awaited a hearing on child pornography charges at Manchester’s district court. About 9 a.m. FBI agents entered the courtroom, told Biron to leave her belongings and took her into an adjoining conference room where she remained for several minutes before coming out in handcuffs.

As usual, the religious freedom nonsense turns out to be cover up for something rotten. Nice to see yet another "torch bearer" exposed.

In my legal days I wound up chasing a few characters who belonged to Christian Businessmen's Associations, real, free-enterprise fundamentalists. Their ranks seemed full of swindlers.

At some point I read or heard that, when you see a fundamentalist in a position of commercial or political power, the more devout they proclaimed themselves to be, the more certain others should be that the Devil held them firmly by both lapels. That cautionary warning never seemed to fail me.

I even had one of these guys come right out and tell me he was involved in his fundie church because it enabled him to sin like a bastard at work all week and then have his sins cleansed on Sundays.

Point to it as yet another example of an anti-gay, “pro-family” Christian covering up their sexual predation? Absolutely. But the “association” with the ADF is pretty weak here. It appears that she was the local attorney who worked with them on a single case. She didn’t work for them, she was involved in a single case. The ADF works just like the ACLU does in this regard, contracting with a local “cooperating attorney” to handle such cases. If an attorney in Keokuk, Iowa who once worked with the ACLU on a single case was caught doing something terrible, we would find it ridiculous if someone said that proved something bad about the ACLU; the same is true here. Hammer her, but the ADF has no real connection to this.