It All Sounds Good Until They Shoot Back

It's no accident that our fondness for resorting to military violence is inversely proportional to the risk that our target might inflict the same violence on us.   Put another way, we're all for whacking people so long as they can't whack back.

How fond would Benny Netanyahu be of targeted assassinations if Hamas had the ability to retaliate in kind?

How likely would Barack Obama be to resort to drone warfare in distant lands if the other side had the ability to send manned drones into U.S. airspace?

It begs the question of how we're going to cope with a "peer" adversary, a country such as China or Russia or a bunch of them in an alliance?

Cruise missiles are great as long as they're all heading in one direction but if cruise missiles start going in both directions then you're into a new game entirely.

We've become accustomed to this monopoly on violence business, far too much so.   It won't last.   It never has and it never will.  It didn't even exist for most of my lifetime and I'm pretty sure it'll be gone before I am.

Sadly, as Andrew Bacevich chronicles in The New American Militarism, in the post Cold-War era, military force or threats of force came to supplant diplomacy as his country's principal instrument of foreign policy.   That sort of hair-trigger diplomacy has led to America's military fiascos in Iraq and Afghanistan.

It's estimated that, four years from now, when Obama leaves the White House, China's economy will surpass that of the United States.   How will America's "muscular foreign policy" (to use Ignatieff's unfortunate words) sit with this ascendant China?

These are timely questions given that Elmer's backward boy, Peter MacKay, is currently hosting his Halifax International Security Forum.   For Pete this seems to be a largely masturbaTory exercise in imagining that Canada has a serious role to play in global security on just about everything from Syria to China. 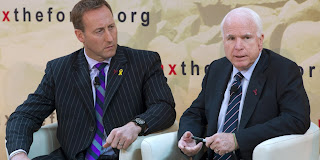 Pete spent today doting on another pile of aging gristle, the late Senator John McCain who championed the imposition of a "no fly" regime over Syria.   McCain, who said his own people are "too war weary" for another ground war, envisions surrounding Syria with American Patriot missile batteries to shoot down any Syrian government aircraft that take to the Syrian airspace.   That, of course, would mean positioning American missile batteries in Lebanon, the Golan Heights, Jordan, Iraq and Turkey.   Good luck with that, John, and thanks for playing.