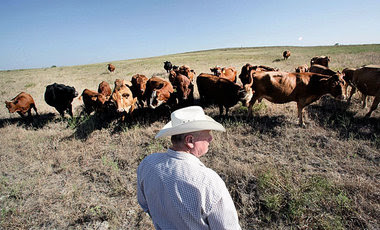 Those shitkickers in Texas may bellow that global warming is a hoax but tell that to their cattle.   The U.S. "national herd," that peaked in 1975 at 132-million head of cattle (when the U.S. population was just 215-million), dropped to 91-million head this year (population now at 315-million) and is still in decline.

As BBC News reports, the herd of the future will also be smaller and thinner.

The US has been suffering a desperate drought that has affected around 80 % of the agricultural land across the country. It has been so severe that in certain parts, farmers have been forced to get rid of their cattle as they simply don't have any pasture for them to graze on.

The drought has also affected the yields of grain crops, which are estimated to be down around 13 % on last year. And because US farmers depend on grain to fatten their beef herds, this has increased pressure to get rid of cattle.

Adding further complication is the politics. The US Environmental Protection Agency (EPA) has had a mandate in place since 2005 that requires a certain percentage of US liquid fuel comes from renewable sources.

In practice this means blending ethanol made from grain with regular gasoline. This year, as the drought persisted, desperate farmers asked the EPA to set the mandate aside to help cut corn prices. They refused.

According to Dr Derrell Peel, from Oklahoma State University the current problems could have long term impacts on US beef. He thinks it is likely there will be changes in how cattle are fed. Less grain, more grass, lighter cattle.

"In general that's the tendency," he told me. "The incentives have changed to a more moderate animal size, we could well see finished weights moderate."

The future for American beef cattle is smaller, thinner, fewer.