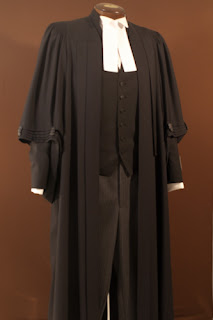 We're wasting precious tax dollars training too damned many lawyers, money we could be putting to good use training more doctors.

The Law Society of Upper Canada is tossing about the problem right now.

“The law schools are now sending us flood upon flood of students,” said lawyer Bradley Wright. “Because no one fails any more, being accepted into first-year law school guarantees you a call to the bar. … Just show up at the door and you will be accepted into our profession.”

Marion Boyd, a former Ontario attorney-general, said the profession is risking its credibility by watering down its high standards.

“I think the public would be concerned to hear how many of us have reservations about how the current system is preparing them [young lawyers],” Ms. Boyd said.

Another council member, Mark Sandler, said the articling problem has added to a worsening problem.

“Judges increasingly report that lawyers appear in front of them without having basic legal skills,” Mr. Sandler said. These newly minted lawyers are unable to adequately argue a case, question witnesses or make calculated judgments on how to pursue a case, he said.

Even back when I began - when high-tech meant IBM Selectric typewriters and photocopiers and when even the fax machine was years away - it struck me there were too damned many lawyers and a good many of those were no damned good either.


Training a lawyer doesn't end when they're called to the Bar.  It takes years of "hands on" experience to achieve competence and that's best done under the tutelage of senior counsel.   Yet getting called officially makes you a "real" lawyer and you can hang up your shingle and start your own practice.   Unfortunately too many young lawyers are turfed out of the nest before they're really able to fly by established law firms that simply have no need for them.  And it's the public that suffers most from that.

Articling students are solemnly warned never to take a case they're not competent to handle.   Yet, when they're cut adrift from the firm where it all began, they usually have no clients.   While they may not have clients, chances are very good they'll have an office, equipment leases, probably a receptionist/secretary, a bookeeper to feed, and, of course, the mandatory insurance premium.  Did I mention food, shelter, clothing and the inevitable student loans?

It's really hard to do that on the cheap.   So when someone strolls through the door with a juicy bit of work, it's hard to say, "sorry, no, I'm not ready for that just yet."   Let the nightmares begin.   Chances are good you may lose the case because you don't know what you're doing.  Your client, who thought he was getting a great deal on cheap fees, goes to talk to the senior guy in the next block who quickly tells him to sue you.   He does.   He wins.   The insurer pays out and adds that to the premium for all the lawyers next year.  But that's hardly the worst.

In any event, we're churning out so many lawyers, some of them are earning incomes that a lot of trade unionists would sneer at.  The Law Society of Upper Canada, trying to help struggling female lawyers stay in the biz while having families, has implemented a fund that will pay parental leave benefits of up to $9,000 for lawyers who net less than $50,000 a year.   Here's a hint.  If you're making less than $50,000, chances are you should be doing something else, especially if you're raising a family.

Productivity in the legal profession has gone crazy since the 50's.  That trade has benefited massively from technology - computer word processing and accounting, the internet, digital communications, you name it.  I knew guys who told me about the idyllic "old days" when a lawyer could handle just a few files, dictated or even wrote out his correspondence by hand to be transcribed at a manual typewriter by a stenographer, kept sane hours and had a good expectation of a comfortable living out of just that.

Today's lawyers handle what, by comparison, is an insane volume of work and they're expected to work ever harder, to achieve really high monthly billings and cashflow to go with it.   The available work is getting concentrated which means there's less to go around for the excess lawyers, the ones who may be struggling to earn $50,000 a year.

Here's the worst part.   The law schools that churn out this unwanted surplus of lawyers are very expensive to staff and maintain.   They take a big chunk of taxpayer dollars.   But, like all professional schools, they also bring in badly needed revenues to universities - all of which would love to have a law school and a medical school, an architecture and engineering faculty and so on.  So they're not going to put the brakes on this.

I'll bet we could shut down half the law schools in Canada tomorrow and still never have a shortage of lawyers, including for legal aid work.   And all that money we save could then be invested into opening new medical schools, training more doctors.   Medical schools regularly turn away plenty of qualified applicants.   There are plenty of men and women who would make fine doctors who just can't get in.   A few of them even wind up, disappointed, in law schools.

So let's do a hard-nosed survey of just how many lawyers Canadians really need and how many law schools we don't need.  Let's take that money we're wasting and put it where it's so badly needed.   I don't know, that sounds sensible enough to me.
Posted by The Mound of Sound at 9:46 AM

Provincial medical associations control the number of medical students; law societies can surely do the same.

On the other hand, under the current situation with medical associations, there's also no public accountability, so the doctors in the medical association just protect their own income by not allowing enough doctors. In Ontario (not sure about other provinces,) far too many people are without a family doctor.

Law societies have not, to my knowledge, even attempted to cap law school admissions. They would be horrified at the optics especially when the profession is often poorly understood and distrusted.

Medical associations, like law societies, are subject to provincial government control. They're like any other body that is given self-regulating status, which is a privilege. Government cedes to these professional bodies the rights and powers to regulate on the notion that is best for the public interest. What is given can be taken away, particularly if it's abused.

It was interesting to listen to Dr. Brian Goldman from "White Coat Black Art" on CBC Saturday mornings talking about the number of recently graduated doctors who cannot find full time work in Toronto. This province is always talking about the number of retired people and the lack of doctors as the reason for the long wait list while doctors in this province, work four days out the week. There is something lopsided about this country, we work as ten little countries with a parent with a bad tooth. It was interesting while working in South Korea how many people who had law degrees were working as so called teachers who couldn't teach their way out of a paper bag.

sounds like a good plan. However, I don't see it happening until maybe resources are very low. More doctors would be nice but then some provinces would have to find these medical school grads a place to intern. This would require, in B.C., that they turn away doctors from other countries which are paying them $100K to have their doctors do a residency in B.C.

We have foreign trained doctors, some are Canadian citizens, who went to other countries to go to medical school, who can not even get a residence in Canada.

We do need more doctors, competent ones. We surely don't need more lawyers. Of course I don't expect Law Societies to limit the number of lawyers because then they don't get the fees & I don't see the universities doing it because they want the students to keep the faculty going. Maybe when the law professors all retire, we might have fewer lawyers.