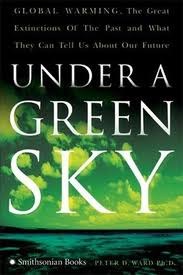 All of us need to get a sense of what the world's oceans mean to us, the role they play in our daily lives even if we live far inland in a place like Winnipeg, for example.

Here's one to chew on.  The oxygen in every second breath you take is supplied by the oceans.   There, does that help connect you to our oceans, your oceans?   Your life literally depends on them.  That sure works for me.

We've tipped nature's balance enough that we have caused the oceans to acidify at rates not seen in 300-million years.  That's a pretty abstract concept inviting a "so what" response.  If you want to know what that means you should get your hands on a copy of Peter Ward's book, Under a Green Sky.

Ward, a paleontologist, has studied our Earth's various extinction events.  He explains how, once oceans achieve a certain warming and  pH level, they stop producing oxygen and start emitting hydrogen sulfide thusly -

First, the world warms over short intervals of time because of a sudden increase of carbon dioxide and methane...  The warmer world affects the ocean circulation systems and disrupts the position of the conveyer currents.   Bottom waters begin to have warm, low-oxygen water dumped into them.  Warming continues, and the decrease of equator-to-pole temperature differences reduces ocean winds and surface currents to a near standstill.   Mixing of oxygenated surface waters with the deeper, and volumetrically increasing, low-oxygen bottom waters decreases, causing ever-shallower water to change from oxygenated to anoxic.  Finally, the bottom water is at depths were light can penetrate, the combination of low oxygen and light allows green sulfur bacteria to expand in numbers and fill the low-oxygen shallows.  They live amid other bacteria that produce toxic amounts of hydrogen sulfide, and the flux of this gas into the atmosphere is as much as 2,000 times what it is today.  The gas rises into the high atmosphere, where it breaks down the ozone layer, and the subsequent increase in ultraviolet radi8ation from the sun kills much of the photosynthetic green plant phytoplankton.  On its way up into the sky, the hydrogen sulfide also kills some plant and animal life, and the combination of high heat and hydrogen sulfide creates a mass extinction on land.   These are the greenhouse extinctions.

And, there you have it.  Were you to look up you would gaze into a pale, green sky.  Only that won't happen because you (or your descendants) would be extinct.

The evidence is plain.  We're warming our oceans.  We're acidifying the waters.  We're observing the spread of ever increasing oceanic dead zones.

Make no mistake about it, kids.  That's what we're playing for - an extinction event.  Only this time it won't be volcanoes and flood basalts triggering the switch to anoxic oceans.  It'll be our doing.

Have you got a source for that 45% Atlantic/5% Pacific claim? Given that the Pacific is the far larger of the two that seems skewed.

I cannot no longer draw upon the source for it was a piece I pulled from the computer produce by MacMillian of Britian for teachers and I used in my classroom five years ago. The reason the Pacific doesn't produce as much oxygen is because it does not have as much plankton and is warmer than the Atlantic. And no .. it isn't skewed. Look for it yourself...you have written that the oceans produce the oxygen we breath which is partly correct.. vegatation contributes as well. Something you don't know so you think it is skewed.

Anon 12:02 what is the point of those links? The Amazon generates oxygen and kinkajoues. So what? And the oceans are full of phytoplankton. Okay.

Anon 11:45 - you're the one who put it out there,not me. I really don't have time to chase down whatever you perhaps recall.

I don't know where you got the notion that the North Pacific isn't heavily laden with plankton or the far south Pacific for that matter. We don't all live in Hawaii but thanks for playing.

You don't like it at all if someone happens to say something you don't know....do you? And another thing you gleen your information from other writers just like anyone else. You do not know everything there is to know.

Is the Amazon made up of trees?

You certainly are lucky to attract such unimaginable brilliance as this anonymous.

Yes, Dana, I know. I think there must be a serious shortage in the Xanax supply.

Let's add to the oceans' problems by breaking some Japanese nuclear fuel rods.

Anon, look. I did check out your point but could find nothing remotely supporting your claim of 45% versus 5%. What makes that dubious is that the Pacific is twice as large as the Atlantic and, in any event, it's the vast southern ocean, Antarctic, that probably generates most of the oxygen and is noticeably nowhere to be found in your contention.

I noticed, Al, that the Japanese are starting the removal of the Fukushima plant's fuel rods today. We'll breathe a lot easier when they're all safely relocated.