Did Bibi Spy on Barack? Easy Answer? Of Course. 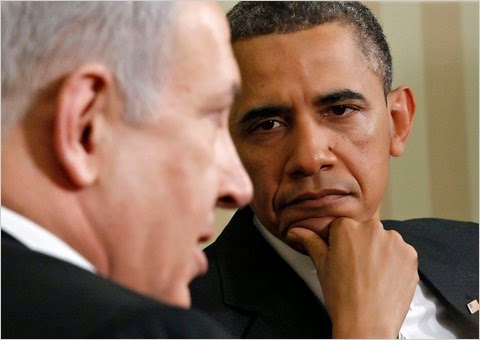 Israel has never been reluctant to spy on its global benefactor, the United States. Now Washington is accusing Israel of having spied on American negotiations with Iran for a nuclear enrichment treaty.

The apparent decision by the White House to leak the allegations is the latest symptom of the growing gulf between Barack Obama’s administration and Binyamin Netanyahu’s government over the Iran talks, in which the Israeli leader suspects US officials of being ready to make too many concessions at the expense of Israeli security. Intelligence analysts suggested that the leak reflects the degree of anger in Washington at Netanyahu’s actions, and could mark a more serious blow to the already tottering relationship.

The leak has come exactly a week before a deadline for the US-Iranian negotiations in Lausanne to produce a framework agreement.

According to the report, the US has long been aware that Israel is among the shortlist of countries with the most aggressive intelligence operations targeting America, alongside Russia, China and France. It said American diplomats attending the talks in Austria and Switzerland were briefed by US counterintelligence officials about the threat of Israeli eavesdropping. It also raised the possibility that Israel gathered intelligence about the US position by spying on other participants in the negotiations, from western Europe, Russia, China or Iran. US intelligence had previously provided help to the Israelis to spy on the Iranians, the report said.
The fact is that Israel has a rich history of spying on the hand that feeds it some $3-billion a year.

The most infamous case was that of Jonathan Pollard currently serving a life sentence.  By some accounts Pollard may be released from prison this November.  Netanyahu has repeatedly pressed various American presidents to free Pollard at one point claiming it would be an appropriate reward for Israel suspending the expansion of illegal settlements in the Palestinian territories for three months.

In the 60s, Zalman Shapiro was suspected of smuggling weapons-grade uranium from his processing plant in Pennsylvania to Israel.  In 1985, US businessman Richard Smyth was convicted of shipping about 800 nuclear bomb triggers disguised as "radio tubes" to Israel.

Then there's this eye-opening summary of Israeli spying against the United States published in 2004 in CounterPunch.

Overall, it seems that Israel was second only to the Soviet Union in spying on America, at least until the recent ascendancy of China.
Posted by The Mound of Sound at 9:54 AM

I wasn't at all surprised about the spying on the US by Israel, that is nothing new. I will though say that finding out there is a claim that Bibi used that information and brought it to the US GOP Congressional leadership to undercut the President's Iran policy, THAT I found a bit surprising and new. Bibi is clearly interfering in the internal politics of the USA in ways no prior Israeli PM ever dared, and I have to wonder just how much this is going to come back to bite him and the State of Israel in the backside.

I've been watching the lockstep of American policy on Israel for decades, and this is the first time in all those many years where I've started to wonder whether some real cracks are actually appearing between them, and this due to the actions on the Israeli side. Bibi may have chosen what he felt was the right course for his domestic political career, and he may also have chosen those he feels his natural allies within the GOP to side with (which given his actions in the 2012 elections was already pushing it) are his only real concern, but one of the main reasons Israel has gotten away with so much is the unified support in American domestic politics for it. What Bibi is doing places that in greater doubt than I've ever seen it.

I don't know where this is going, but that the Obama WH leaked not just the spying but what it appears Bibi did with the information in trying to manipulate American domestic politics I find significant and something that clearly shows great displeasure. Whether it becomes something more substantive in how it affects American ME/Isreali political calculations and policies, time will tell, but it does seem to me to be one of the rare times where it may well be more than just superficial conflicts between the two nations.

"Actions on the Israeli side"
Well, sort of. In this relationship it's hard to tell who's who, in a way. Netanyahu seems to be owned lock, stock and barrel by Sheldon Adelson, who's American, and strongly Republican. Ultimately the whole thing seems to come down to Adelson's decision to use his Israeli asset/s to do Republican politics, thus redefining Israel as the enemy of the Democratic party. Honestly, if I were running Mossad I'd have that man assassinated--inadvertently he's probably the biggest danger to the Israeli establishment there has ever been.