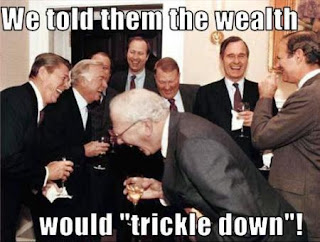 There has been a lot written in recent years about neoliberalism. Ralston Saul, Mirowski, Galbraith and many others have weighed in and the more you read the clearer the picture of how we were herded onto this path on a journey that's now decades old. Man, we've been had - big time.

If you're not up to speed on the neoliberal era and how we're still powerfully trapped within it, The Guardian's George Monbiot has a new book, "How Did We Get Into This Mess?"  There's a wonderful summary, excerpted, in today's Guardian.

It's not that there's all that much new in Monbiot's book but he seems to have put all the pieces of the puzzle together to offer a fresh look at the mess we find ourselves in. Read the article, buy the book.

A couple of teasers:

Mention it in conversation and you’ll be rewarded with a shrug. Even if your listeners have heard the term before, they will struggle to define it. Neoliberalism: do you know what it is?

So pervasive has neoliberalism become that we seldom even recognise it as an ideology. We appear to accept the proposition that this utopian, millenarian faith describes a neutral force; a kind of biological law, like Darwin’s theory of evolution. But the philosophy arose as a conscious attempt to reshape human life and shift the locus of power.

...Among the results, as Paul Verhaeghe documents in his book What About Me? are epidemics of self-harm, eating disorders, depression, loneliness, performance anxiety and social phobia. Perhaps it’s unsurprising that Britain, in which neoliberal ideology has been most rigorously applied, is the loneliness capital of Europe. We are all neoliberals now.

...In 1951, Friedman was happy to describe himself as a neoliberal. But soon after that, the term began to disappear.

...The freedom that neoliberalism offers, which sounds so beguiling when expressed in general terms, turns out to mean freedom for the pike, not for the minnows.

...Sayer argues that the past four decades have been characterised by a transfer of wealth not only from the poor to the rich, but within the ranks of the wealthy: from those who make their money by producing new goods or services to those who make their money by controlling existing assets and harvesting rent, interest or capital gains. Earned income has been supplanted by unearned income.

Like communism, neoliberalism is the God that failed. But the zombie doctrine staggers on, and one of the reasons is its anonymity. Or rather, a cluster of anonymities.

Neoliberalism’s triumph also reflects the failure of the left. ...when neoliberalism fell apart in 2008 there was ... nothing. This is why the zombie walks. The left and centre have produced no new general framework of economic thought for 80 years.

Every invocation of Lord Keynes is an admission of failure. To propose Keynesian solutions to the crises of the 21st century is to ignore three obvious problems. It is hard to mobilise people around old ideas; the flaws exposed in the 70s have not gone away; and, most importantly, they have nothing to say about our gravest predicament: the environmental crisis. Keynesianism works by stimulating consumer demand to promote economic growth. Consumer demand and economic growth are the motors of environmental destruction.

Okay, wise guy, so what are the alternatives? No one is sure but no one seems particularly interested in experimenting either. We're just too comfortable here in the rut that consumes us.

My thoughts? We can begin by abandoning the GDP growth model that has carried us so disastrously far beyond the finite limits of our environment, our very biosphere, Spaceship Earth. We have to reduce the economy until it becomes a subset of the environment for we have already exhausted the environment's ability to support our activities, our consumption, our excessive population. That means what Lovelock calls "sustainable retreat." Making do with less, living smaller, finding radical new systems of organization.

One of these is the theory of Steady State Economics. This is the development of a post-capitalist, mature model of organization in which consumption is limited by the environment, where reproduction is regulated so that the rate of births is set by the rate of deaths. There's still room for growth - in knowledge instead of production and consumption. The focus is on quality of life, enjoyment of life improvements.

This sounds radical yet it was contemplated as an inevitability by none other than Adam Smith at the time of the American revolution. He foresaw the growth economy having a natural span of no more than two centuries. Today the theory is continued by economists such as Prugh, Daly, Costanza, Cumberland, Goodland and Norgaard. Their works are readily available and not terribly hard to digest.

There is no magic wand to fix this mess. The best theories of steady state thinkers won't shield us from most of what's coming our way this century. But the sooner we throw off the shackles of neoliberalism and implement these obvious ideas the better off life will be for the generations to follow.
Posted by The Mound of Sound at 10:21 AM

Neo Liberalism sounds innocent enough , so does provincial Liberals when applied to BC.
Names are high jacked and an inattentive populous is sucked in once again.
Liberal used to be word describing a middle of the road attitude ; something acceptable to the masses.
Easy to see why we arrived where we are now.

The best book I've ever read about the nuts and bolts of creating a new economic framework is called the Resilence Imperative. There are real world examples of how these theories actually play out in reality, it's an extremely useful book for the down and dirty alternative to Corporate Capitalism. But the movement is still really small, but growing.

I read the review, Thoreau. Thanks. You might want to get a library copy of Gar Alperovitz' "What Then Must We Do?"

It explores how the middle class might be restored by workers' collectively reclaiming the means of production and he shows how well it has worked where it has been attempted.