Death with Dignity? Maybe, Maybe Not. 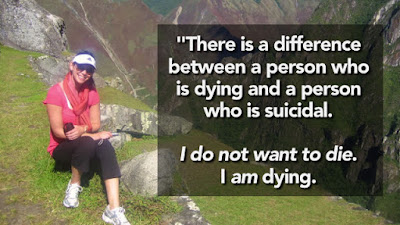 The Liberal government's doctor-assisted death bill is already attracting a good deal of legitimate criticism. The bill, which mainly amends other laws including the Criminal Code is being criticized as too restrictive and not covering many people who might need humanitarian intervention to help end unbearable lives.

No one under 18 is eligible, no matter how dire the circumstances. The act treats them as not competent to decide their own fate. It's also unclear whether some patients with terminal diseases that claim the patient's mind long before they take the body will be able to request intervention. For example, Alzheimer's is claiming a lot of lives. It invariably takes the mind first. Will Alzheimer's patients be allowed to leave a living will calling for the administration of life-ending drugs once their quality of life is gone and the physical ordeal begins?

The bill speaks of unbearable suffering and certainty of death but it doesn't speak to the issue of quality of life. It doesn't say that the destruction of a person's quality of life should permit them to receive intervention.

On a good note, the bill does seem to include the two most important pathways - physician or nurse administered drugs and self-administered life-ending drugs. It speaks of physicians being able to write prescriptions for such drugs, noting on the prescription the intended purpose (presumably to allow pharmacists to decline to fill the script on grounds of conscience which is expressly protected).

Exactly what they're getting at is a critical point. Oregon, for example, has had a Death with Dignity Act on the books for many years. It provides a means for terminally ill patients to obtain a prescription for life-ending drugs.

The humanitarian aspect of the Oregonian approach is that it's not required or even contemplated that once the terminal patient is approved that person will ever have the prescription filled or, if filled, will actually take the life-ending drugs.

Many individuals can go through the dying process without needing the drugs. Others may develop unbearable suffering and choose not to continue. What's important in either case is that having the drugs relieves the fear of winding up dying a lingering, agonizing death.

The idea that a terminally ill person should have the option to die as serenely as possible in their own home, in their own bed, perhaps with a friend in attendance or in the presence of family may become reality in Canada and, if so, it's been a long time coming.

The other thing about Oregon's experience is that it's been in effect for almost 20-years during which the process has been monitored, scrutinized, researched and reported on in credible academic journals. A lot of the dire warnings we get in Canada have been found to be just fear mongering.

For the terminally ill, the process of exiting life - as they must - ought to be on their terms with the minimum of government interference. I'm not sure the Trudeau government has gone nearly far enough but it's a start.  The bill does provide for the matter to come back for Parliamentary review five years after implementation so there is hope that, by then, they'll find the courage to go further.

Strangely, the Libs are ignoring the recommendations of an all-party committee that looked at the issue in detail. Specifically, Bill C-14 ignores the recommendations that
- People diagnosed with conditions like dementia should be able to make advance requests for medical help to die, and
- Mature minors should have the right to choose assisted death.

I foresee needless and costly court challenges that are likely to succeed because the Bill goes contrary to the considered recommendations of the Parliamentary committee that heard all the evidence. I'd have expected no less from Harper, but Trudeau was supposed to rely on evidence, not faith.

This is one of those issues where very few people will agree with what the government has proposed.

Personally, I do not know what to think. I have been wrestling with this issue for awhile and I just cannot decide where I stand.

It's a start.
When I was staying in Portland ten years ago I got interested in this because my dad had ALS. I asked a number of medical people - doctors, pharmacists - what proportion of people with the prescription actually use it. They all answered similarly - very few, but that the peace of mind the option provides is of incalculable medical benefit.

@ Anon. Your remarks border on the facetious. As apparent from my remarks I agree about the deficiencies but to suggest that the Trudeau Liberals are no better than the Harper Cons on this inexcusably disingenuous. Anyone reading this blog with any regularity knows I carry no brief for Justin or his administration but I don't believe in being thuggish either. Apparently that's where you and I part company. Give him credit where it's due even if it is half-marks.

@ Ottlib - wait until you start the third period of the great hockey game of life. Trust me, it'll help you focus.

@ Alison, or, if I may, Miss "Sunni Ways." Perhaps you can tell how much I love that.

It must have been an ordeal for your father and his family to go through ALS. I can't begin to imagine your ordeal. If memory serves, that was Sue Rodriguez' challenge.

You speak powerfully of the essential point that a good many terminally ill don't find that they have to use the end of life drugs. It just relieves them of fear and, sometimes, terror.

What human being believes they have some right to deny another, terminally ill, that comfort? I must stop now. I'm getting quite angry.

Thanks for stopping by.