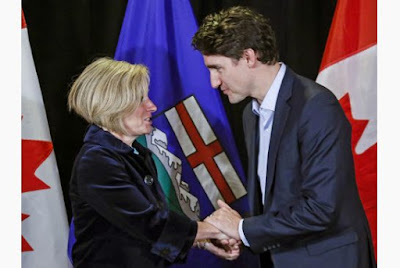 A word of caution for the prime minister of Canada - Don't even think about it.

"It" is the loathed Northern Gateway pipeline initiative designed to transport hazmat sludge, also known as dilbit, from Alberta across the seismically active mountain and river wilderness of northern British Columbia to the pristine coast at Kitimat and then onward to Asia via the Douglas Channel and the treacherous waters of the Johnson and Hecate Straits.

Trudeau said he would never allow the Northern Gateway to go through yet the industry shills who constitute the National Energy Board seem to have other ideas.

The project was thought to be dead -- finished off by a Liberal campaign promise to restore a long-standing moratorium on oil tanker traffic off B.C.'s north coast.

But recent comments by federal Transport Minister Marc Garneau have opponents gearing up to fight the controversial pipeline proposal again.

Speaking to Bloomberg News, Garneau was quoted Monday as saying that the government still hasn't "worked out" what a moratorium on tankers actually means. The article also quoted Garneau as saying it is "premature" to say the Northern Gateway is dead...

And when Trudeau issued mandate letters to his new ministers last November, he earned big headlines and praise from environmentalists for including a moratorium on tankers in his instructions to Garneau.

Some observers contend the Northern Gateway business is a ploy, a scare tactic, so that when that route is officially killed off, British Columbians will be complacent to the Trudeau government's go-ahead on the southern, Kinder Morgan pipeline expansion.

Why hasn't Trudeau cleaned up the National Energy Board, perhaps the most pro-industry regulator in Canada? I guess he's too busy heading to Washington to sign Canada up for a greenhouse gas plan his actions in the west show he has no intention of honouring. 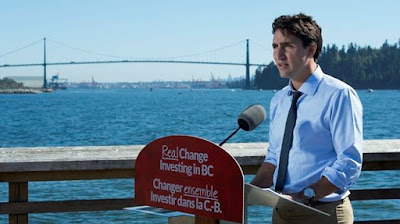 Man, I really had hopes that this batch of Liberals would be different from previous covens.

Pretty much dashed now and it didn't even take a year.


I don't know, Dana. I don't want to give up on him yet but it's getting very hard to wait for him to stand up.

The BDS motion, C-51, the Saudi arms deal, the dilbit/pipeline/tanker fiasco, the TPP (probably). Those are the big things and I am totally against the government on all of them.

What angers me is that a lot of Liberals are against those same things but they'll still support the party that offends their sensibilities. I was a Liberal for about 40-years but I began to lose faith during Dion and became repulsed under Iggy and bailed out.

Like you I had hopes that Trudeau might restore my faith in the LPC but he wasted no time shattering that delusion.

Letting the catholic church off the hook by cancelling the appeal thereby letting other organizations justify themselves getting off the same hook is a betrayal too.

Refusing to examine the machinations by the RCMP and the Crown behind the Duffy charges leaves the door open for them to utilize the same tactics - which I am increasingly afraid they wouldn't resist very hard if it suited them.

Handing over the marijuana plan to Blair was the first signal to me that they were nowhere serious about that too. Now Philpott telling us it's next year although harassment and arrests will continue anyway.

Someone, even maybe more than one, in that caucus may have the conviction that what they said during the campaign should be upheld
following their election but in our history that's been pretty rare.

If the PMO starts to become larger that would be a signal too.

I didn't want to give up on Trudeau Mound, but I have. Not sure if he's completely doing what his advisors are telling him and not thinking for himself, or if he really thinks his decisions are the right ones. I can't get a handle on his mindset. He's left alot of the Harper beauracracy intact. Entities like the NEB, Harper clones, are not being removed.Decisions like approving the BDS Motion and the Saudi deal are both from Harper and Cons. We've yet to see his decision on the TPP. I'm pretty convinced though that he'll ratify it.I'm actually back to being worried about Canada's sovereignty.

I'm sorry too and disappointed as well. But you know, there had been some tweaking at me during his campaign and I tried to give him a chance. Living Alberta it didn't work out. However, it is turning out to be the same old, same old. Poor Canada, we have to sell arms to S. Arabia. Why aren't we going after that 7. 8 billion from those people who have been hiding their money instead of stealing again from our pension funds. From me, Anyong