What Do the Saudis Know that Justin, Rachel and Brad Haven't Figured Out? 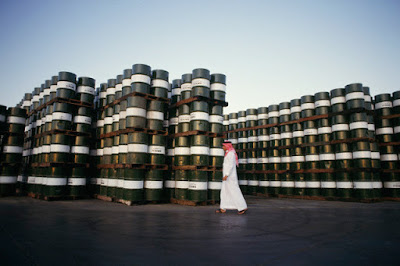 The rulers of Saudi Arabia want to wean their government off its dependence on oil revenues by - wait for it - 2020.

One part of the plan will see shares sold in state-owned oil giant Aramco to create a sovereign wealth fund.

The Vision 2030 plan, he told the Saudi-owned Al-Arabiya news channel, would ensure "we can live without oil by 2020".

Oil has made Saudi Arabia a major economic force. But it comes at a cost. The short-term problem is the volatile price of crude oil, which is now less than half what it was in mid-2014. Saudi Arabia has deep pockets.

It will not go running to the International Monetary Fund for financial help, something another oil exporter, Angola, has done. But the Saudi reserves are eroding and with almost three quarters of government revenue coming from oil, the price fall is making itself felt.

For the long term, international efforts to combat climate change create huge uncertainty about demand for oil in the future. Oil will not lose its dominance of the market for transport fuel in the next few years, but further ahead the outlook is unknown.

Saudi Arabia, of course, has massive reserves of low-cost, low-carbon conventional crude oil and yet they want out. Here in Canada, our political leadership, federal and provincial, intends to double down on development of the highest-cost, highest-carbon unconventional oil on the planet.

Update: Foreign Policy has more on the Saudi plan to diversify their economy.
Posted by The Mound of Sound at 3:11 PM

I'm a bit confused. If the Saudis want to wean themselves off oil and want to sell shares of Aramco, who do they expect to buy those shares? Canadians?


I'm pretty sure they're not looking to Canada, Toby. Russia? As good a bet as any. After all the Saudis are in a mood to seriously shake up Washington.

More like The House of Saud wants to cash in before America brings democracy to the desert kingdom.

I'm not sure how much Trudeau understands the consequences of the decisions he makes Mound. The Libs have just floated an idea they may proceed with. Their thinking they might sell public assets to investors including private companies.This is one of the ways they'd pay for repairing and rebuilding Canada's infrastructure. They don't call it privatization. They call it "asset recycling."

My sense of it, Pamela, is that Trudeau and Notley (although not Wall) see themselves with no way out. Their political futures are at stake and, in fairness, many Canadians - probably plenty enough to tip an election - still support the Tar Sands initiative. Canada will not lead on the abandonment of fossil energy. We'll be well down the list of nations willing to act. My guess is that it will be markets and global environmental processes that shut down the Tar Sands, not Ottawa and certainly not Edmonton.

The open spigots policy of the Saudis will certainly continue.
They will keep their price below well the cost of production of 'unconventional oil'. The Tar Sands will/are the first to go belly up.

The Saudis not only want to sell off the corporate structures (as you highlight) but are also desperate to get their oil to market before "markets and global environmental processes ... shut down" all f.fuels incl. the Tar Sands" (the good case scenario)
or
* they simply try and buy their way out of the collapse of civilization during the desperate 'retreat' of humans.

This morning on CBC I , again, heard the fiction that there is a discount due to lack of pipelines. As you point out Mound, the discount is because Alberta bitumen is high carbon and expensive to extract, clean and dilute for shipment and refine. New pipelines will not cure these tar sand problems. They cannot be cured with crude at less than $80. I also heard that 60% of Canadians believe in the tidewater fairy and new pipelines.

Few ask about due diligence. For the pipeline/oilpatch to expand ( or even stand still ) one or both of them would have to operate at a loss. What rational investor will pump money into Energy East with the expectation of financial ruin ? Pipeline capacity will lead to further world oversupply and the inevitable fall in price.

I'm sure Trudeau and Notley have been told the facts, but feel the need to reassure the 60% who believe . Ironically, it may be the invisible hand of the market that bails them out of their silliness . When no pipelines get financed they will have someone to blame.

We can be sure that we the taxpayers will, at the very least, subsidize the pipeline(s) and the tar sands. As usual, we will be hosed while the promoters will run away with the pots of gold.