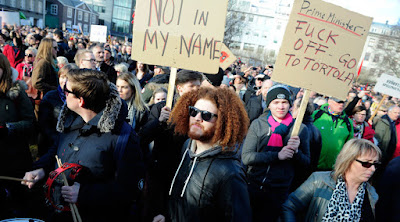 The first major casualty of the Panama Papers scandal is Icelandic prime minister, Sigmundur David Gunnlaugsson.  He resigned today after waging a rearguard action against revelations that his wife owned an offshore company with big claims against some failed Icelandic banks.

Gunnlaugsson went from supposedly knowing nothing to trying to call a snap election. His attempt to plunge Iceland into another general election were blocked by the president. His other escape routes gone, Gunnlaugsson had no choice but to punch out. Given the public outrage I hope Siggie slipped out the back door.