Now This May Come As a Surprise 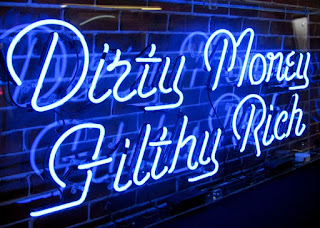 The world is abuzz with tales of dictators, gangsters and oligarchs hiding ill-gotten gains and transacting nasty deals including gun running via shell companies in shady places like Panama, the Bahamas, the British Virgin Islands or the Caymans. It's a story featuring legions of millionaires and their betters served by a small army of lawyers, accountants and investor types hatching endless schemes to evade taxes and the taxman around the world. Such dealings, of course, wouldn't be possible in respectable, modern countries.

Okay, enough with the preamble. Now - and this time you'll be playing for the lawn furniture -  name the #1 and #2 countries deemed easiest for criminals to set up shell companies. Surprise, top of the list is Kenya. But coming in a close second is the United States of America.

A study out of Australia's Griffith University in conjunction with researchers from Brigham Young U and University of Texas, Austin found that a lot of shell company skulduggery goes on right in America's backyard, Nevada and Arizona in particular.

Against the conventional policy wisdom, those selling shell companies from tax havens were significantly more likely to comply with the rules than providers in OECD countries like the United States and Britain. Another surprise was that providers in poorer, developing countries were also more compliant with global standards than those in rich, developed nations.

Mossack Fonseca also has set up shell firms for clients in Florida, where money laundering is more or less the state sport. As a test of this procedural laxity, Michael McDonald, a former IRS criminal investigator, once successfully incorporated an anonymous company there using the name of a friend’s dog on the registration papers as the firm’s president.

The Panama Papers show that Mossack Fonseca helped nearly a score of foreigners anonymously buy luxury properties in Miami. One of them, Paulo Octávio Alves Pereira, is a Brazilian developer and politician currently under indictment at home, according to theMiami Herald.

...A report by the NGO Global Witness documented dozens of scams and crimes pulled off with American shell companies, including massive Medicare fraud by an Armenian-American crime syndicate and money laundering by Mexico’s Los Zetas drug cartel (which used some of the laundered funds to buy race horses, including one named “Number One Cartel,” that won millions of dollars at the track).

President Barack Obama’s administration and various Western governments have been calling for a crackdown on offshore havens for years, but it’s as easy as ever to set up dummy companies. “For every country that cracks down on money laundering, two pop up,” Richard Bistrong, who went to prison in 2012 for paying bribes through a Swiss shell company while serving as a sales executive of a major defense contractor, and who often used a Swiss bank account to avoid detection, said in a phone interview. “Switzerland made it harder to launder money after the UBS scandal, but there’s still Lichtenstein, Monaco, Singapore, the British Virgin Islands, and plenty of other options.” (Bistrong got a reduced sentence for serving as an undercover FBI informant and now heads a group called Front-Line Anti-Bribery.)

Update: A helpful article that explains why so few American names have turned up via the Panama Papers. Americans don't have to take refuge in Panama, not when it's easier to hide their money right under Uncle Sam's nose. It's telling that the State of Delaware is home to more companies, over a million, than residents, under a million.
Posted by The Mound of Sound at 8:03 AM