One More Thing About that Saudi Death Wagon Deal

To hear Uncle Steffie talk about it, you would think Canada's 15-billion dollar armoured fighting vehicle sale to the Saudis had no greater dimension. Dion never links it to what else is going on between the panoply of Western death merchants and the House of Saud.

The thing is, this is a collective effort and those high speed, cannon equipped light tanks are just one part of an integrated rearmament of Saudi Arabia, the purpose of which no one wants much to talk about. There are no clean hands in this. In fact most of those hands wind up covered in the blood of civilians.


The war in Yemen has become an invisible and dirty conflict. The US and Britain are propping up a stalled Saudi effort to assert itself as a regional power – but with Riyadh armed to the gills by the West, it demonstrates little restraint in its targeting.

As the war enters its second year, a shaky fourth truce is holding and investigations by the United Nations and Human Rights Watch have produced evidence that Washington and London could be complicit in war crimes – as the provider of weapons, training and intelligence for the Saudi forces.

Much of the humanitarian damage has been wrought with US and British supplied weapons. But Yemen might be just the start of a slippery slope for the West because, as [veteran CIA analyst Bruce] Riedel observes, the Saudis want more, not less US "policing" in a region in which the biggest beneficiary of the Yemen war has been al-Qaeda in the Arabian Peninsula [AQAP].

He writes: "AQAP now controls some 600km of the southern coastline – from just outside Aden to Mukalla where, at the start of the war, it looted $US100 million from its banks."


Noting that until recently the Saudi-led coalition fighting in Yemen had not taken the attack to AQAP, Riedel says: "They are now earning at least $US2 million and perhaps as much as $US5 million a day in smuggling oil. The group is stronger today than ever before."

Peace talks are scheduled in Kuwait on Monday [April 18], and in the event of failure, Riedel sees a grim aftermath, because Riyadh is threatening a new offensive to wrest control of the Yemeni capital, Sana'a, from Houthi rebels, even as the UN estimates that 21 million Yemenis need immediate relief, one-third of whom suffer severe food insecurity.

Now at the Brookings Institution, Riedel writes: "A battle for the capital will compound the tragedy enormously."

In January, a UN investigative panel reported "widespread and systematic" Saudi attacks, arguing in a 51-page report: "The [Saudi-led] coalition had conducted airstrikes targeting civilians and civilian objects, in violation of international humanitarian law, including camps for internally displaced persons and refugees; civilian gatherings, including weddings; civilian vehicles, including buses; civilian residential areas; medical facilities; schools; mosques; markets, factories and food storage warehouses; and other essential civilian infrastructure, such as the airport in Sana'a, the port in Hudaydah; and domestic transit routes."

Well, I wonder if Cap'n Sunni Ways, prime minister "a deal is a deal" Trudeau has read that UN report and asked himself just what in hell do the Saudis want with another $15-billion worth of those scoot'n shoot death wagons? What's all that about?

Just a word on the Trudeau government's self-serving bullshit about what the Saudis may or may not do with these death wagons. Let's go down Memory Lane and revisit how the Saudis made use of the first batch of 1,000 Canadian LAVs they ordered.

More than 1,000 earlier-model LAV IIs were sold to Saudi Arabia. Deliveries of the LAV IIs ran from the early 1990s until 2012. (Saudi LAV deals gained at least $2.2B for GM Defense and, later, General Dynamics Land Systems-Canada.) Most, if not all, of those LAV IIs went to Saudi Arabia National Guard (SANG) Mechanized Brigades. Unlike SANG Light Infantry Brigades, all SANG Mechanized Brigades are based in the Central Region around Riyadh.

Saudi Arabia National Guard troops have been deployed to quell peaceful civilian protests, including at the height of the Arab Spring. In March 2011, SANG LAV IIs were driven into neighbouring Bahrain (as part of the so-called Peninsula Shield Force). At the same time, SANG moved against Shia protesters in Saudi Arabia's Eastern Province. The leader of the Saudi Shia protests was Nimr al-Nimr – whose arrest and 02 Jan 2016 execution has brought the purchase of the new LAV 6.0s by the Saudi regime back to the attention of Canadians.

The Eastern Province has the largest concentration of Shias in Saudi Arabia. Qatif, a city on the Persian Gulf, has been described as "a militarised zone, surrounded by checkpoints and armoured vehicles". [14] SANG LAV IIs have also deployed to the Yemeni frontier (as a part of the Saudi's Operation Decisive Storm). So, thus far, Canadian-made LAVs are hardly enhancing the regional 'stability' sought after by Stéphane Dion and Global Affairs Canada.

Better yet, how about the idea that these LAVs are intended to level the playing field in a Saudi civil war pitting the army against the national guard in a war for succession to the throne?

According to Stratfor, a real potential exists for civil war within Saudi Arabia – fought between the regular Royal Saudi Armed Forces and the Saudi Arabia National Guard . [16] Stratfor sees a growing rivalry between Mohammed bin Salman and the Prince commanding SANG – Mutaib bin Abdullah, a son of King Abdullah who died in 2015. The SANG Commander is, thus, both a ministerial rival and a potential challenger in the future succession to the 80-year-old – and ailing – absolute monarch, King Salman.

According to Stratfor, the proposed solution is to eliminate the Ministry of National Guard and place the SANG under the control of the Ministry of Defence. Since the aged monarch is said to be suffering from dementia, this proposal likely originated with the King's favourite son. Should his Ministry be abolished, Prince Mutaib bin Abdullah must choose whether to forfeit his current power or use SANG troops to help him stage a palace coup.

Fighting between SANG units and 'regular' Royal Saudi Armed Forces would then become inevitable. The latter have superior equipment but the former have the numbers. The sale of LAVs will have evened the odds between the SANG and Saudi Arabian Army armour. The Canadian-made vehicles may be light armoured vehicles but some of the LAV 6.0s are to be heavily-armed. A 105mm anti-tank gun seems an odd choice for 'internal security' duties but will be perfectly suited to fighting a civil war against a better-, heavier-armoured opponent.

So much for Stéphane Dion's efforts at enhancing regional 'stability' in the Middle East.

So that's what the upgunned, 105mm. LAVs may be all about. Of course they have other uses. Here's a Canadian made, heavy gun LAV in Bahrain in 2011 on democracy suppression duties. 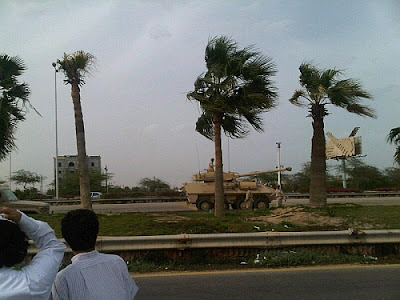 A look at the past use of SANG LAV IIs is the best way to gauge the future. In 2011-2013, SANG LAVs took part in crushing the 'Arab Spring' protests by Saudi Shi'ites (as well as helping neighbouring Bahrain to crush protest in that Persian Gulf state). The pattern of SANG use of LAVs against civilians seems pretty clear.

Even if the " jeeps " are not used to kill any children, their presence in the Saudi armory will free up other equipment to attack schools. Canada will be just as complicit in the murder of 8 year old, 6 year old and even one year old Yemini kids.

Read the update, Rumley. That should put your suspicions at rest.

The mush that Trudeau and Dion are spouting is just propaganda to quell Canadians' doubts. Undoubtedly, there are inducements coming from the White House. The Americans are very good at seducing others into their military industrial complex by spreading the jobs around. In times when the only good jobs are building and selling war wagons there are many who are trapped into doing so; ethics are expensive and the victims are people we don't know on the other side of the world. That selling war wagons to a depraved state like Saudi Arabia is morally wrong is not part of the equation; nor is that the deal does nothing to enhance the defense of Canada.

I wonder if they were pretzeled with this deal from the get go. They've botched the handling of it, but I wonder if legal/trade/bilateral-wise Canada is somehow bent over a barrel. The LAV deals go back a long way, long before anyone really cared where they went. I'd really want to be a fly on the wall when the relevant ministers and staff worked this one out.

Anyong said.....Perhaps the hope is by Western Governments, they will kill each other off.


@ Boris - yes, you may be right. That, however, doesn't take them off the hook for being deceitful about it. If anything we should be told how their hands are tied. We could consider it a primer of international trade.

This whole things disgusts me and should make the skin of every Canadian crawl. London, Ontario has become 'Columbine North'. It's creepy how there are so many old white guys doing backroom deals for murderers. And then defending them.
Here's the other issue: if we really want to do something about Saudi Arabia, we stop buying their oil. Boycott everything from this country of dictators and Bin Laden breeders.

Don't worry Mound... you've now got the great Tony Gazebo in your corner on this one.

NPoV - no, I don't have that sleazy greaseball in my corner. I oppose this on the facts. Clement is using it as a political football. Had Harper held on that jackass would be praising the deal.

I still think Canada is a proxy to Washington on this deal Mound.My guess is that Canada under Trudeau will be completely subservient to American Imperialism. I also think they will be subservient to what ever Israel wants as they have already shown by approving the conservative BDS motion. Although implicit in this BDS motion approval is also meant to please the US.People think the liberals were brave when they refused to continue with air strikes in Syria and Iraq. They weren't, although I and many Canadians were glad they did stop.The US has no problem with Canada making this decision. We were very minor players anyway.Where the real bravery will come in is Trudeau saying no to future "trade" deals like the TPP that the US will want Canada to ratify. Saying no to Neoliberalism is what takes guts. I don't see Trudeau and his ministers having the courage to do this. So what if Trudeau develops progressive domestic policies ,but then turns around and completely sells out Canadians and their sovereignty because of the decisions he makes on Foreign policies. A I think this is what he will do.

I tend to agree, Pamela. General Dynamics is, of course, a major US defence contractor. The Land Systems division in London, Ontario is just a branch plant operation. There isn't an order that isn't approved by Washington first and, by the time it gets to Canada, it's a "done deal" thing.

What I most dislike about the Trudeau government's handling of this is their repeated attempts to put lipstick on this pig. Their fabrications are so blatant as to be appalling. Trudeau dismissing these vehicles as "Jeeps." Dion's "done deal" claims. On and on and on. They're looking into our faces and lying their asses off.