They Never Fail to Disappoint 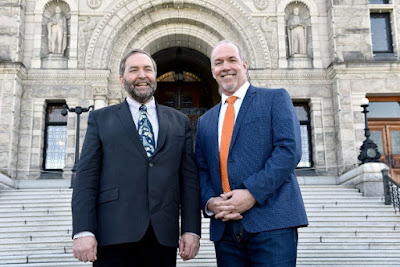 British Columbia is effectively a one-party province. We have the very conservative B.C. Liberal government - and that's about it. There's a party that claims to be the opposition, a government in waiting, but it's the B.C. NDP and, well, you know what that means.

Like their Ontario and federal counterparts, the B.C. NDP are adept at clutching defeat out of the jaws of victory. Let's just call it the "NDP Mange." Voters get up close, take a good look at them, and say, "Oh, fu_k no!"

Out in LotusLand, our last election was the NDP's to lose. They went in pushing on an open door. Even I was calling the Crispy Clark the "outgoing premier" in eager anticipation of an impending political liberation. But NDP leader, Adrian Dix, was having none of it. Clark would not be toppled so long as Dix was opposition leader - and she wasn't.

In May, 2014, John Horgan was acclaimed (hadn't they ever heard of Ignatieff?) the new leader of the provincial NDP. Horgan has tried hard to raise his profile but to most of the people I know he's a wet paste sort of guy.

Earlier this week, outspoken radio host/pundit Rafe Mair tore a strip off Hogan for flip-flopping on a major LNG project.

Apparently, according to Alberta Premier Rachel Notley and BC NDP leader John Horgan, we have a new doctrine in Canada which essentially says that Jobs Come Ahead Of Crisis When A Powerful Union Leader Says So.

Now Horgan has again joined Notley in opposition to the Leap Manifesto.

"In total collectively it doesn't reflect the values of British Columbians. Our past and our future will be dependent on the development of natural resources," said Horgan.

Horgan and Notley have company. New Brunswick NDP leader Dominic Cardy has wiped his boots on Leap calling it "something dreamed up in a downtown Toronto coffee shop."

It's becoming hard to see how, barring a deep split between the federal and provincial NDP, the feds will have much chance of establishing themselves as the green alternative to the Libs or Tories.
Posted by The Mound of Sound at 12:43 PM