I Think In Australian, the Word is "Chunder"

Our Aussie cousins are a rough and tumble crowd with a reputation for speaking their mind (or so much of it as they can muster most days). And they aren't holding their collective tongue on viewing their new fiver due to come into circulation in September. 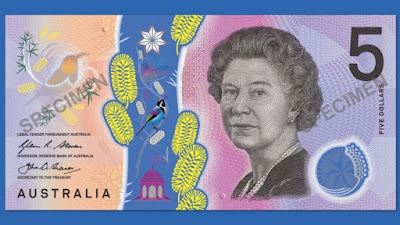 Most critics contend it makes them think of nothing so much as vomit, for which the Australians have coined their own affectionate term, "chunder." Those weird little yellow things that many mistake for toilet brushes actually depict the 'prickly leaved wattle' which apparently is every bit as Australian as chunder itself.
Posted by The Mound of Sound at 8:50 AM

LOL!! Thanks for posting. Now I can ask my Aussie friend. From Anyong.

The only thing about it that bothers me is having that person's face on it.


Shame on you, CV SoG, she's a lovely old thing, a great-grandma to boot. That said she doesn't look entirely pleased to have her visage on that banknote.

I don't believe in sponsoring wealthyfare. I also don't subscribe to the whole Divine Right bull that comes with 'royalty'.

And honestly, I can think of a number of Canadians who belong on our currency.

The sooner both Australia and Canada renounce this family, the better.

Canada's association with the royals drives some Americans to apoplexy. I have witnessed Texans turn a lovely shade of purple because the Queen's image is on our money. It makes no sense to me but if she can have that effect then long live the queen!

AS an ex pat; I would like to see the end of the privileged class; why should you or I bow to anyone?
That said , buyer beware, do you wish for a USA style Republic?
Better to decide what we want before throwing out the old..


Churlish, CV S0G, very churlish. Why, some day you might be some little sprog's great grandma or facsimile thereof. Then you'll be whistling a different tune.

Toby, I recall dealings with American lawyers who were taken with our court gear - waistcoats, gowns, pinstripe trousers, wing collars etc. - and the fact that we used to call Supreme Court justices and above "my lord" or "m'lady." I think they were disappointed that we didn't have the full Rumpole - wigs. We finally shed the appellations and it's now just the humble "your honour."

Court gowns were awfully expensive too. They had to be custom made by the best military tailors. That was a good incentive not to put on too much weight.

$1.53 a head per year, let's not get carried away. That gets us HRH, her entire family, our Gov Gen, the Lt. Govs., their lovely residences and staff, and they put in appearances, do charitable works and, when they do their job right, restrain prime ministers and premiers from excesses. All in all, I'm okay with it not that I think of it from one month to the next. It's a non-issue to me.

Mound..
Would you bow before Royalty, call him or her your Highness!
I don't question your comment that at $1.53 / year it's cheap entertainment but don't forget the House of Lords and it's Canadian counterpart!
Lord Black FFS!!

Off subject; worth the intrusion?
Maybe there is a God( well not really)

@ Trailblazer - let's see what the raids uncover. Perhaps, then, there is some higher intelligence, a Force. Thanks for the link.

'some day you might be some little sprog's great grandma or facsimile thereof. Then you'll be whistling a different tune'

That sounds a bit like projection to me. And since I'm a male, Canadian by birth, and not white, the chances of any of that are zero. I don't need or want anyone to worship or bow to me as if I'm more important than they are.

And I stand by what I wrote above. I don't believe public monies should go to fund one particular family's entire existence and lifestyle because they are deemed 'royalty'. Nor do I believe they should be afforded a courtesy or otherwise that somehow implies they are more worthy or better or 'or facsimile thereof' than anyone else.

They're human beings just like me - nothing less, and nothing more.

The only thing they represent is something that needs to be left in the past. It's time they all get shuttled to the unemployment line just like everyone else who loses the jobs.

Anyong said....Tell me how we ought to recognize the Magna Charta but through the head of the Royal Family? It is our form of Government and from where our "Rights and Freedoms" came. It wasn't something Perrier Trudeau thought of all on his own as say many Canadians. What would you do, try to make this country a Republic? Jumpin Jesus.